Michelle Pfeiffer Explains Why She Took Time Off From Hollywood

In a new cover story for Interview, Michelle Pfeiffer spoke with director Darren Aronofsky about her career beginnings, self-doubt and why she took a break from acting.

Unlike some of her peers who started acting as children, the three-time Oscar nominee waited until after high school to pursue the craft. Aside from a few workshops and a high school drama class, she didn’t have any formal training. “I didn’t come from Juilliard. I was just getting by and learning in front of the world,” she told Aronofsky, who directed her upcoming film, Mother! “So I’ve always had this feeling that one day they’re going to find out that I’m really a fraud, that I really don’t know what I’m doing.”

That anxiety has persisted: She revealed that one of her fears while working on Kenneth Branagh’s adaptation of Agatha Christie’s Murder on the Orient Express, due this year, was that she was “ruining” it.

It’s a big year for Pfeiffer. Her HBO movie The Wizard of Lies, in which she plays Bernie Madoff’s wife Ruth Madoff, will be released in May. Mother! hits theaters in October, and Murder on the Orient Express comes out in November. But 2017 also marks her return to the screen after a years-long hiatus — her last film came out in 2013. She explained that the break was partially self-imposed, because she previously built her film schedule around her kids.

“I was pretty careful about where I shot, how long I was away, whether or not it worked out with the kids’ schedule. And I got so picky that I was unhirable,” she said.

Now, she’s an empty nester. “I’m a more balanced person honestly when I’m working,” she said. “I really want to work now, because I can.”

Read the rest of Pfeiffer’s cover story at Interview. 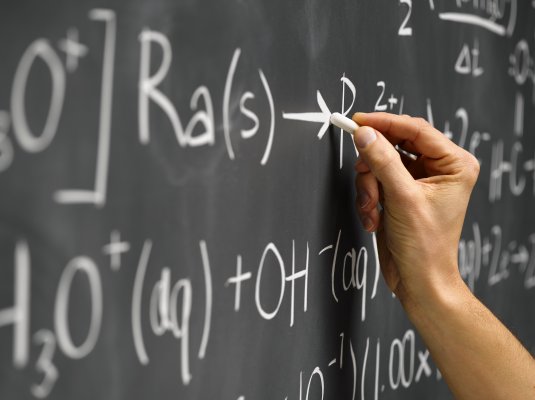 The Way We Teach Math Is Holding Women Back
Next Up: Editor's Pick