The wife of a Taiwanese human-rights activist who went missing in China 10 days ago has demanded his release after the Chinese authorities confirmed Wednesday that Lee Ming-che had been detained for allegedly threatening national security.

“My husband is passionate about human rights,” Lee Ching-yu told a packed news conference at Taiwan’s parliament in the capital, Taipei. “He is innocent. Free Mr. Lee!” she shouted, flanked by legislators and rights activists.

News of Lee Ming-che’s arrest was released by Beijing’s Taiwan Affairs Office on Wednesday after more than a week of snubbed requests for information from his family and Taiwanese authorities. The announcement from Beijing confirms fears that he is the latest victim of an escalation in China’s repression of civil rights and free speech.

Lee Ming-che disappeared while traveling from the semiautonomous Chinese territory of Macau to the southern city of Guangzhou, just days before Chongyi Feng, a China-born Australian academic researching human rights, was barred from leaving the same city.

Human-rights groups believe Lee Ming-che may have been caught up in a campaign of targeted disappearances after a raft of new national security laws gave sweeping powers to emboldened Chinese police forces.

Lee Ching-yu believes her husband, a community-college manager, may have been targeted through new, strict regulations to monitor and control foreign-funded NGOs, which could have put his human-rights activities on the radar of the national security apparatus for the first time.

Although not a high-profile activist, Lee Ming-che encouraged fundraising for families of Chinese human-rights workers, and discussed China-Taiwan relations on popular messaging app WeChat. “This kind of behavior is perfectly normal in a civilized country,” says Lee Ching-yu.

Earlier this week, Lee Ching-yu, who works as a human-rights researcher, told TIME that she was blindsided when her college-sweetheart husband of 20 years vanished. As she dropped him off for an early morning flight from Taipei to Macau on March 19, there had been no discussion about possible dangers.

“On the way to the airport we talked about our family. My husband comforted me about my mother, and reassured me that she would recover,” she says, explaining that her mother had breast cancer.

Initially his wife did not worry when she heard nothing after his 8 a.m. flight. The gnawing fears only set in that afternoon, when his friends waiting in Guangzhou messaged her to inquire where he was. She contacted the airline, his hotel, any authorities she could reach, to track him down. For nine anxious days, she waited for news.

It was Lee Ching-yu’s dogged determination that likely provoked the Chinese authorities to finally break their silence over her husband’s detention. On Tuesday, she handed over his hypertension medicine to officials at the Straits Exchange Foundation, a Taiwanese government-backed body that acts as an unofficial intermediary between Taipei and Beijing. The foundation’s attempts to locate her husband had been ignored, but Lee Ching-yu’s stunt appeared to work.

“Taiwan resident Lee Ming-che allegedly engaged in activities endangering our national security and is under investigation by relevant authorities,” said Ma Xiaoguang, a spokesperson for the Taiwan Affairs Office of the Chinese State Council, on Wednesday. Ma said that Lee Ming-che’s health was “satisfactory,” but gave no further details about his current location or the accusations against him.

Lee Ching-yu’s decision to publicize her husband’s case was driven by a resolve to put the spotlight on human rights and to stress that he had committed no crime.

“People now care more about human-rights issues because of our problem,” she says. “People have the right to legally go to China. It’s not only about my husband but about other NGO workers.”

At Wenshan Community College, where Lee Ming-che works, director Cheng Shiouw-jiuan says his disappearance had awakened the students’ interest in human rights. And Amnesty International has also taken up his case.

“There is absolutely no doubt that the threshold of intolerance towards dissent in China has considerably lowered in recent months and years,” says Nicholas Bequelin, East Asia director at Amnesty International.

“In this general climate of political hardening and an attempt to blacken and demonize human-rights activists and dissidents as traitors … and with the NGO law in the background, what Mr. Lee was or wasn’t doing before clearly is not seen in the same light, however innocuous it was,” he says.

Lee Ming-che, who volunteers for human-rights group Covenant Watch, is the first Taiwanese NGO worker to disappear on mainland China, sending chills through Taiwan’s civil rights community. “We’re not sure if it’s safe for human-rights staff to go to China,” says Chiu E-ling, head of the Taiwan Association for Human Rights.

Lee Ming-che’s situation has been complicated by Taiwan’s frosty relations with Beijing, which views the self-governed island democracy as a renegade province that must eventually be reunited with the mainland. The Taiwan government’s Mainland Affairs Council, the primary agency for dealing with Beijing, has demanded that Chinese government departments disclose their “handling” of Lee Ming-che and ensure his safety.

“I don’t know if the government is really helping or not, but I would prefer to trust them,” his wife says.

Her biggest priority for now, is to honor her husband’s values.

“For the past 20 years he has been fighting for human rights, even when it hasn’t been successful,” Lee Ching-yu says. “He believes that if you do nothing, nothing will change.” 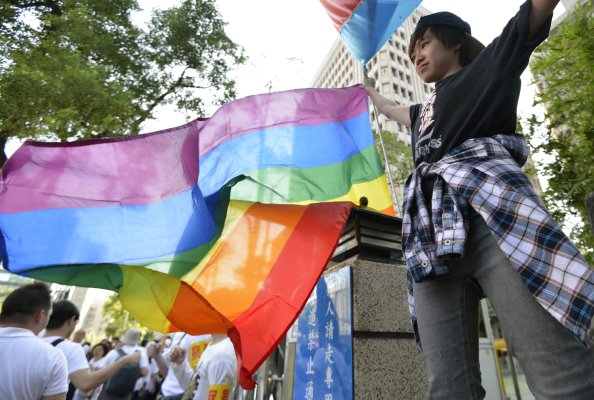