Not long ago, Bill Kochevar ate some mashed potatoes — and when he did, the world turned over. Kochevar, 56, performed that seemingly unremarkable act with his right hand, a hand that hadn’t moved independently since the day, eight years ago, when he was riding his bicycle in a multiple sclerosis charity event and didn’t notice that a mail truck had stopped short in front of him. He collided with the truck, fractured his fifth cervical vertebra, and became, just like that, quadriplegic.

And yet now he can eat mashed potatoes — and drink a cup of coffee and enjoy the sublime, independent pleasure of scratching his own nose.

Those accomplishments and the science behind them are the subject of a paper published Tuesday by The Lancet, describing a breakthrough in restoring the ability of paralyzed people to move their limbs by commanding them with their brains. “To me,” Kochevar told TIME, “it feels exactly the same as it did before, except there is a little delay.”

The study was co-led by biomedical engineers Bolu Ajiboye and Robert Kirsch of the Clevelend FES (functional electrical stimulation) Center, in collaboration with Case Western Reserve University, University Hospitals and the Cleveland Veterans Affairs Medical Center. The goal of the team’s work is to sidestep the most devastating aspect of spinal cord injury — that once damaged, a cord does not heal, meaning that while the brain regions that send commands and the muscles that obey them are intact, the connection is severed.

So far, functional electrical stimulation has made real if rudimentary progress in overcoming that problem. At the FES Center, investigators have been able to implant electrodes in various muscle groups and connect them to a computer system that stimulates particular muscles in particular sequences. Patients with some residual mobility in, say, a shoulder or a hand, can use that motion to activate the computer, allowing them to reach or stand or cough — which is important when breathing is impaired.

“It is similar to the way a pacemaker works,” Ajiboye said. “You can regulate the beating of the heart and using similar methods, you can reanimate paralyzed limbs.”

Those systems, however, have limitations. For one thing, they are a long way from restoring the elegance of natural movement — with a mere thought activating the relevant muscles. For another, they are best used by people whose injuries are no higher than the fifth and sixth cervical vertebrae. Patients injured at the fourth vertebra and higher may simply not have enough muscle function left to benefit fully.

For that reason, Ajiboye and his colleagues started investigating a way to put the brain back in control. The Cleveland team began working with Kochevar in 2014, and the first step was to map his brain. Hand and arm motion is controlled by the pre-central gyrus in the primary motor cortex, adjacent to a structure called the hand-knob area. But everyone’s brain is slightly different, and if you’re going to control muscle commands, precision is everything.

So Kochevar spent time in a functional magnetic resonance imager (fMRI), while he imagined moving different parts of his body and the investigators tracked exactly which parts of the brain lit up. “This kind of patient-specific structural imaging is the only way to get an accurate atlas,” Ajiboye said.

Electrodes were then implanted at the proper spots in the brain and attached to a computer interface that reads the commands the motor cortex sends. Initially, Kochevar used this system to command a virtual arm that he saw on a computer screen. It may not have been his own arm, but the instincts were still there and he thought the image on the screen into motion all the same.

“It went very well very quickly,” Kochevar said. “I learned how to do it right away and got better and better.”

Read more: This Type of Exercise Can Make Your Brain Healthier

Throughout that period, electrical stimulation was being used to strengthen his arm and hand muscles that had atrophied over years of paralysis. An array of 36 electrodes were also implanted in his right upper arm, forearm and hand, to activate the muscles that control reaching and grasping. A harness had to be used to elevate his arm against gravity since the muscles in the shoulder were not also activated. Finally, Kochevar put all of these components together, and in 2015 began using his newfound mobility in the lab.

Right away, he was able to perform the three basic tasks — eating, drinking and nose-scratching — with 80% to 100% accuracy. What’s more, while he notices some response delay, it’s minimal. “The computer samples brain activity 30,000 times a second and the muscle reacts within 20 milliseconds,” Ajiboye said. “The literature suggests that it’s when the delay gets to 300 milliseconds that it’s really noticeable.”

One thing that doesn’t bother Kochevar is that while he can reach and grasp, he doesn’t have the tactile feedback of knowing, by touch alone, when he’s grasping the cup or lifting the fork. This effectively eliminates proprioception — the sense you have of how all of the parts of your body are operating in relation to all of the other parts, and the degree of effort required to perform a task. But that doesn’t seem to matter.

“I don’t get the feedback but I don’t notice that I’m not getting it,” Kochevar said. “We actually did some experiments in which I closed my eyes while reaching and I was able to do it.”

For now, the system is nowhere near ready for practical use. Kochevar has a small appliance, or “pedestal,” attached to his scalp that is connected to the implanted brain electrodes. Two small boxes of electronics must be attached to that when the system is in operation, and wires must connect to the muscle electrodes. The Cleveland team’s goal is to miniaturize and implant all of the electronics invisibly within the body, and then connect brain to hand wirelessly. The legs, too, could be activated the same way.

None of that technology has been developed yet, but none of it need be that far away either — not with advances in programming and miniaturization coming as quickly as they do. That could be paradigm changing. The dictum when it came to paralysis was always that it’s a tragedy that is forever. For the first time, spinal injury victims might have hope that their disability is, instead, merely for now. 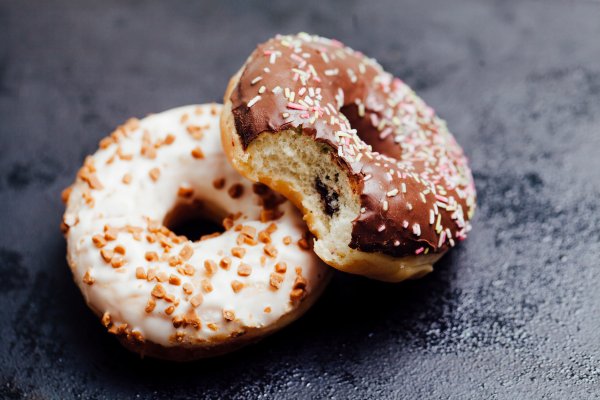 8 Things That Happen to Your Body When You Eat Sugar
Next Up: Editor's Pick