Three Florida lawmakers are asking the White House to reimburse Palm Beach County and surrounding areas for the costs incurred by President Trump’s frequent visits to his Mar-a-Lago resort.

Trump has visited Mar-a-Lago five times since he took office. In a letter to the president released Monday, Democratic Rep. Lois Frankel of Florida calls these visits are “a financial burden” for Palm Beach. If Trump won’t reimburse Palm Beach, Frankel requests he put an end to his nearly weekly visits.

“While we want the fullest protection for your visits, we hope that you would be responsive to the losses of small businesses and residents of Palm Beach County,” the letter to Trump reads.

“If compensation is not assured of being forthcoming, we respectfully ask that you curtail your visits until such time as that matter is resolved favorably to our area,” the letter concludes.

The Palm Beach County Sheriff’s Department and Fire Rescue pays $70,000 in overtime each day Trump visits, amounting to $1.7 million to date, the letter says. The county expects to spend a total of $3.3 to $5.8 million this year if Trump’s frequent visits continue.

Due to pro and anti-Trump protests as a result of Trump’s visits, the city of West Palm Beach has paid $60,000 in police overtime.

Additionally, the Palm Beach County Park Airport, known as the Lantana Airport, has been “severely impacted” by the flight restrictions from the Secret Service, and businesses operating out of the airport have lost hundreds of thousands of dollars as a result.

“During your campaign and presidency, you vowed to make jobs more plentiful and government less wasteful,” the letter to Trump reads. “We sincerely request that you lead by example.”

Trump will visit Mar-a-Lago again in April with Chinese President Xi Jinping. Officials estimate that visit will cost the sheriff and fire departments $280,000.

The White House has not responded to request for comment.

Local officials have spoken out about Trump’s frequent visits and have said the White House has refused to reimburse the city.

Dave Kerner, a county commissioner for Palm Beach’s third district, asked the county’s attorney office to explore forcing the owner of Mar-a-Lago to reimburse the county for “special benefits” given to the resort. With Palm Beach facing a $40 million deficit and a heroin epidemic, Kerner says taxpayer money should be contributing to these issues, not special protections for the president.

“We’re very honored to have the president here, but at the same time, his travel here is such high frequency he’s not visiting Palm Beach County — he’s governing from it,” Kerner told MONEY earlier this month. 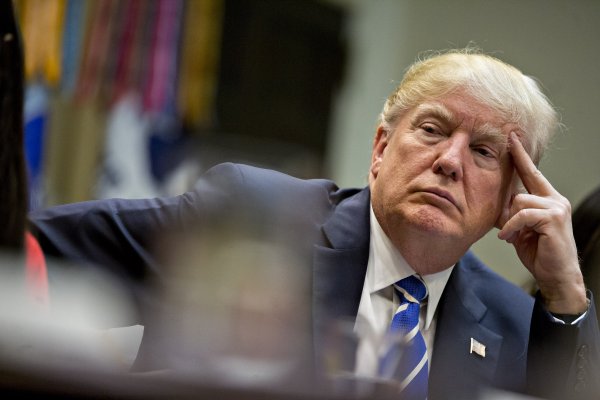 President Trump Open to Deal With Democrats
Next Up: Editor's Pick