Behind the Striking Viral Photo From the Russian Protests

Police officers detain a demonstrator during an opposition rally in Moscow on March 26, 2017.
Maxim Shipenkov—EPA
By Katie Reilly

Tens of thousands of demonstrators took to the streets in Russia on Sunday in nationwide protests against government corruption — the country’s largest anti-government protest in several years.

One of the most striking photos from the protests depicted Olga Lozina in Moscow being carried away by several police officers, who held her by her arms and legs.

Lozina, who described herself as “a graduate of Physical-Technical Institute,” told the Russian website Meduza that she had been walking through the center of Moscow with her mother and sister, when they encountered a police blockade and a crowd of people. Lozina was arrested after her sister and her mother, who was taken into custody after asking police why they had detained another man.

Lozina told Meduza that she was not “rudely detained,” according to a translation of her account, but she said she had “suffered.” At the time of the interview, she did not know when she would be released.

A human rights groups estimated that more than 1,000 people were arrested in total during Sunday’s protests, while Russian police said it was 500, according to the Associated Press. 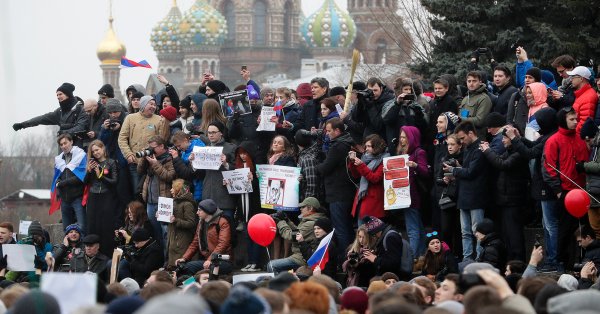 This Is What a Nationwide Protest Against the Russian Government Looks Like
Next Up: Editor's Pick