How Leggings Became the Most Controversial Pants

On Monday, United Airlines defended an employee’s decision to bar two girls from boarding a flight from Denver to Minneapolis on Sunday morning because their leggings violated the airline’s dress code for “pass travelers,” adding another incident to the surprising history of what seems to be the most controversial leg-covering of the moment.

But, even though it may seem that such news is a decidedly recent phenomenon, in fact leggings have been around for centuries.

Before they became a form of activewear, they were used for practical purposes. For obvious reasons, the concept of pants — as opposed to skirts, kilts or other clothing that doesn’t protect the legs individually — is closely linked to the development of societies that used horses to get around, as described by T.C.F. Hopkins in Empires, Wars, and Battles: The Middle East From Antiquity to the Rise of the New World: “From Asia to Europe, the riders of horses are also the wearers of trousers. The image of horsemen without leggings is a film convention, not a reflection of actual riding conditions.”

The term leggings dates back centuries, but the early uses of the word applied to items that few of today’s yoga pants devotees would recognize as leggings.

In North American history, the term was often associated with the leg coverings worn by some Native Americans and eventually adopted by many settler frontiersmen. Those leggings could often look more like high-top moccasins than pants, and for special-occasion use artists would decorate them with beadwork or attach flattened porcupine quills to them. Great Plains indigenous women wore leggings made out of hides from deer, elk and various game animals. The garments served not only a societal role — it was proper etiquette for women to keep their ankles covered — but also a practical one, protecting women’s legs from plants and animals, says Emil Her Many Horses, historian and curator at the Smithsonian National Museum of the American Indian.

Meanwhile, in Europe and colonial American history, the word could refer to something more like a sturdy set of stockings. Stockings had been invented during the 16th century, when Londoner William Lee invented a special loom that could produce machine-knitted silk stockings. By the 18th century, men who sought a lower-leg covering for warmth could turn to leggings that “fully covered the lower leg from a few inches above the knee extending to cover the top of the foot,” according to Colonial Williamsburg’s guide to men’s clothing. “Made of stout woolen or linen cloth or of leather, leggings and spatterdashes were worn by the sporting gentleman, laboring man, and the military.”

For centuries thereafter, even after modern trousers came into fashion, leggings were comfortable, tight but protective garments worn by children or by men during activities that ranged from battle to hunting, eventually transitioning from mostly something that just covered the lower leg to something more like pants. That old-time use of the word leggings remained the dominant one until the 20th century.

Then, the high demand for rubber during World War II led to a reduced supply and a demand for rubber alternatives. During the course of research into that problem, DuPont chemist Joseph Shivers developed a synthetic fiber in 1959 that could stretch up to 600% of its original size and go back to its original shape, according to the American Chemical Society. Originally called Fiber X, this lighter, more breathable invention replaced natural rubber in garments and became known as Lycra or Spandex (an anagram of the word expands).

So, when stretch pants became technologically possible, it made sense that they would eventually take on the name that had long been associated with garments that fit tight around the legs. And the timing was perfect for leggings to become what they are today: the 20th century saw a rapid rise in pants-wearing by women, as well as a growing trend toward casual dress in American life.

As the children of the 1960s stretched social norms, leggings made of stretchier fabric came into vogue. By the 1970s, Oxford Dictionaries was defining leggings as “‘tight-fitting trousers made of a stretch fabric, worn especially by women and girls.”

A look at appearances of the word in English-language books reveals that the word peaked around 1940 — presumably the old usage of leggings — and then began to pick back up again in the 1980s. That’s when women were increasingly seen wearing Lycra leggings on the street and in the gym, as popularized in part by Jane Fonda, who was the most popular face of the rise of aerobics. According to anthropologist Kaori O’Connor, who has written extensively about Lycra, “women embraced the new physical and social freedom, expressed through rule-breaking practices like aerobics, in which strenuous, sweaty gym-based exercise became socially acceptable for the first time.”

But, as O’Connor has written about, the garment became closely associated with workout culture and youth, to the extent that its more recent popularity among women of all ages for a wide variety of activities was surprising to many.

The popular, casual attire has come under fire many times in the past few years as being inappropriate for students in school and even for adult women in public. In 2014, anger over the lack of tolerance for leggings prompted some middle school girls in Illinois to picket. The girls were apparently told leggings were “too distracting to boys,” the Evanston Review reported at the time. Critics have called such policies against leggings sexist and have repeatedly condemned the bans. Last year, after a Rhode Island man wrote a published letter to his local newspaper decrying yoga pants as “bizarre and disturbing” on adult women, hundreds of legging-clad protesters demonstrated outside his house. Also in 2016, a North Carolina school district’s ban on skinny jeans and leggings was met with outrage after officials reportedly said one of the reasons for the change was because “some of the ‘bigger girls’ were getting bullied because of their tight jeans.”

Nevertheless, analysts found that 2016 online purchases of leggings were up 41% over the year prior, with the volume of orders surpassing orders of denim as women have come to see them as more versatile and appropriate for working out, sleeping, and going to the office. 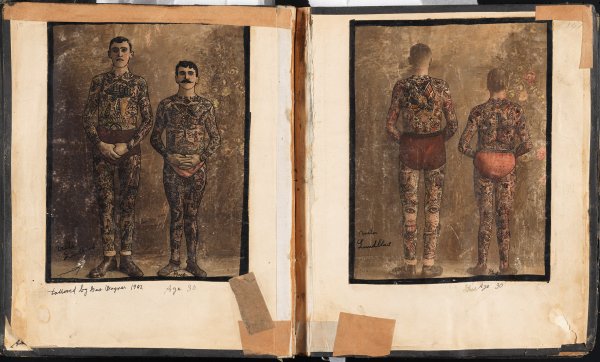 See Rare Images From the Early History of Tattoos in America
Next Up: Editor's Pick