50 Years Ago This Week: How Birth Control Changed Everything

The subject of this week’s cover story cost, as TIME noted, just 11 cents to make per unit—but, in the less than a decade of its existence, it had already “changed and liberated the sex and family life of a large and still growing segment of the U.S. population” and seemed primed to “go far toward eliminating hunger, want and ignorance” by helping to control the world population.

That subject was, of course, the pill.

This fascinating examination of the history, mechanisms and implications of oral contraceptives manages to be both a reassurance about a new medical possibility to a nervous public — one that remembered the recent tragedy that was thalidomide, when women quick to take a miracle drug found out too late that it caused birth defects — and a forward-looking story about birth-control innovation of the sort that might still run in the pages of TIME today.

At the time 24% of white American women who used any contraception were on the pill (and a slightly smaller percentage of black women) and the article showcased the way it was already changing their lives. One mother of four said that if she had another baby she was sure she would die, while a young newlywed explained that the confidence that her career could continue uninterrupted until she chose to have a baby was helping her and her husband save up to buy a home.

Not every element of the story is thoroughly modern. One anonymous woman rather casually admitted to slipping the pill to her daughter without the daughter’s knowledge, and concern over whether uneducated women were capable of remembering to take a pill every day reads as overblown. But in other ways, the story reflects a moment in time when concern over population control and the rise of women in the workforce converged with the available science to provide the right solution at the right time.

Still, problems existed that couldn’t be solved by the pill, one woman told TIME: “They’ve improved my complexion, done away with menstrual problems, eliminated worry, and I feel better physically. But they haven’t straightened out my lousy love life.”

School segregation endures: Years after Brown v. Board of Education, Southern schools were still segregated. A new court decision had announced to such schools that they’d better get moving, but not everyone accepted that result: in Alabama, segregationist presidential hopeful George Wallace and his Governor wife Lurleen Wallace asked for the state to transfer all control of public education to the Governor’s office, with plans to openly defy the court order.

Fighting over tongues: Knowing that the fight between Serbs and Croats would erupt into battle more than two decades later adds another layer to this article about what was then Yugoslavia, and the fight over whether Serbian and Croatian were getting equal time as shared languages of the nation.

Keeping it off: A short piece under the rubric “modern living” tells the story of Jean Nidetch’s discovery that she was able to lose more weight and keep it off if she added a group-therapy element to her diet. She monetized her idea as Weight Watchers, which at that point had 500,000 members in 16 states. (There were 1.1 million active subscribers at the end of 2016.)

Watching you: After decades as a private, family-owned company, Pinkerton’s National Detective Agency was going public — and making big waves in the stock market. The organization, whose detectives “acted as Union spies during the Civil War, set up the Secret Service [and] spent the postwar years chasing such outlaws as the Reno Boys and the James Brothers,” was benefiting from growing demand for private security guards.

Not-so-great vintage ad: When hiring a temp for an office job, do you look for the one with a rose clenched between her teeth? This ad for a temp service providing office “girls” certainly implied that you might.

Coming up next week: Getting ready for ’68 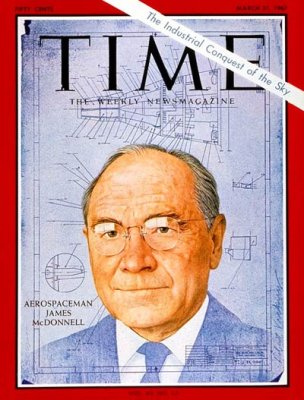 50 Years Ago This Week: Behind the Scenes on a Nonstop Cross-Country Flight
Next Up: Editor's Pick