The fight over Supreme Court nominee Neil Gorsuch isn’t just over whether senators will vote for him. It’s also about how many votes he needs, exactly.

Led by Minority Leader Chuck Schumer, some Democrats argue that Gorsuch needs to get 60 votes to overcome a filibuster and be confirmed, which they claim is a historical standard.

But Republicans counter that the filibuster was rarely used in the past and point out that two justices currently sitting on the court were confirmed with fewer than 60 votes—Justice Clarence Thomas by 52 votes in 1991 and Justice Samuel Alito by 58 votes in 2006.

“The fact is, an attempted filibuster of a Supreme Court nominee is rare, and to do so in this context, with such an eminently qualified and brilliant judge is nothing short of obstructionism,” White House spokesman Sean Spicer said Monday, adding that it “undermines decades of Senate tradition.”

Constitutional experts say both sides have a claim, though the Republican argument is the stronger one. Fights over cloture votes, which require 60 votes to end debate, have rarely happened for Supreme Court nominees. The Washington Post counted just four cloture votes over Supreme Court nominations in modern times, most recently for Alito. But even though it was routine, justices still had to clear the 60-vote threshold to get their up-or-down vote.

“You can describe the practice in different ways,” said University of Virginia law professor John Harrison. “They’re (each) emphasizing the part of the picture that they want to emphasize.”

For now, the fight is mostly theoretical. Democrats do not yet have the votes necessary to successfully filibuster Gorsuch, although a handful of blue-state senators have joined Schumer in saying they won’t vote for cloture. There are 52 Republicans in the Senate, so it would only take eight Democrats to join them to end a filibuster.

Even if Democrats succeeded in filibustering Gorsuch, using a precedent set by Democrats in 2013, Republican leaders could trigger the so-called “nuclear option,” changing Senate rules to end the practice for Supreme Court nominees.

“Historically, Supreme Court nominees were not subject to the kind of partisan attacks they are now,” Carrie Severino, head of the conservative Judicial Crisis Network, tells TIME. If the Democrats mount a filibuster, she argues that going nuclear would “return the Senate to the historical practice, which is that Supreme Court nominees get up-or-down votes.”

Majority Leader Mitch McConnell has vowed to confirm Gorsuch before the Senate leaves on its April recess, one way or another.

But anger on both sides over recent Supreme Court nomination political history has the body in a tense standoff. As Democratic Sen. Chris Coons lamented Monday on MSNBC, “There’s Republicans still very mad at us over the 2013 change to the filibuster rule, we’re mad at them for shutting down the government, they’re mad at us for Gorsuch, and we’re not headed in a good direction.” 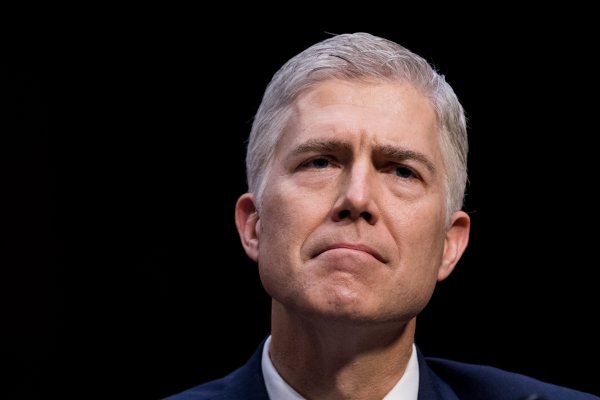 Neil Gorsuch on Email Slamming Guantanamo Bay Lawyers: 'Not My Finest Moment'
Next Up: Editor's Pick