Harrison Ford Called Himself a 'Schmuck' After a Controversial Airplane Landing

Harrison Ford realized his mistake immediately after he accidentally flew over a jetliner during a landing mix-up in February.

In newly released audio from the incident obtained by TMZ, the Star Wars legend told the tower at Orange County’s John Wayne Airport, “I’m the schmuck that landed on the taxiway.”

On Feb. 13, the 74-year-old actor flew his private aircraft close to a taxiing plane after mistakenly landing in a taxiway instead of the runway at the California airport.

“I was distracted by the aircraft which was in movement when I turned to the runway and also the big turbulence from the landing,” he said while communicating with a tower operator after the landing.

The actor took responsibility for the mistake, admitting that it was a “big deal.”

In a video of the incident, Ford’s yellow single-engine Husky aircraft is seen flying over the American Airlines flight waiting to cross the runway he was cleared for. The Federal Aviation Administration is now investigating the landing.

Ford was reportedly captured on air traffic control recordings asking, “Was that airliner meant to be underneath me?” Air traffic control then informed the actor that he inadvertently landed on a taxiway with awaiting aircraft instead of the runway he was instructed to head toward.

In audio released last month, the actor was heard making mistakes during radio communication with air traffic control in the minutes leading up to his close call. He responded to the control tower by fumbling his words and telling them that he was flying a helicopter rather than his single-engine plane. 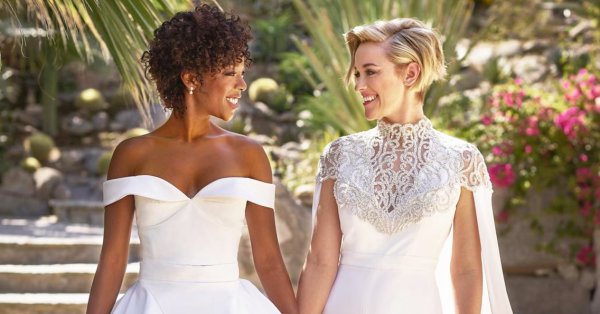 Orange Is The New Black's Samira Wiley and Lauren Morelli Are Married
Next Up: Editor's Pick