Joe Biden Has One Big Regret: Not Being President

Former Vice President Joe Biden does not regret sitting out the 2016 race for the White House. Biden told a crowd at Colgate University recently that he was comfortable with that decision, which he made in the wake of his son Beau’s death from cancer.

But Biden does regret not being the president.

“Do I regret not being president? Yes,” Biden said during a recent conversation with Colgate’s president Brian W. Casey. “Do I regret not running for president, in light of everything that was going on in my life at the time? No.”

If the former Vice President had run in 2016, it would have been his third time attempting to become the Democratic presidential nominee. Biden has been open about his desire for the presidency and his decision not to run in 2016. Biden told the crowd he had the data to justify a run and he still believes he would have won, but he knows his heart wouldn’t have been in it. When he lost Beau, who died of brain cancer in May 2015, Biden said he lost “part of my soul.”

“No man or woman should announce for president of the United States unless they can look the public in the eye and say, ‘I promise you I am giving 100 percent of my attention and dedication to this effort,’” Biden said.

Later in the event, the former second-in-command under Barack Obama denounced some of President Donald Trump’s positions, including his ongoing battle with the news media. But Biden also urged Americans not to give up on the President.

“We should all have hope that not knowing anything about the job before he did it … he can grow more into the job and understand that the United States is the essential nation in the world in the year 2017,” Biden said. 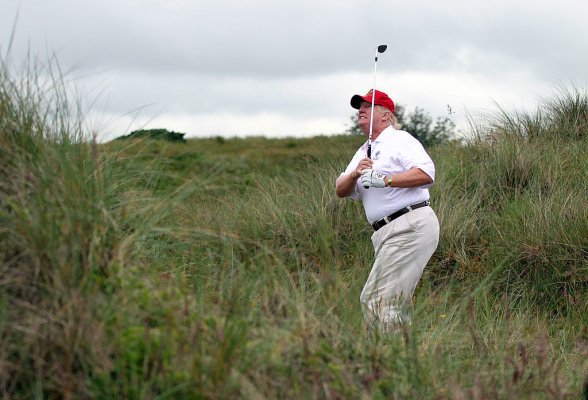 President Trump Was at a Golf Course Again This Weekend
Next Up: Editor's Pick