Hong Kong Has a Controversial New Leader. What Happens Next?

On the evening of Oct. 21, 2014, Carrie Lam sat down with the people. It was the 25th night of the Umbrella Movement, the massive pro-democracy demonstration that would shake Hong Kong for nearly three months, and Lam, a steely bureaucrat who had served as Chief Secretary, essentially the government’s COO, since 2012, had been sent to represent the government in a televised debate with a delegation of protesters. Their demand was simple: give the Hong Kong people the right to directly elect the chief executive, the territory’s top leader, in the next election in 2017.

It did not go well. Since 1997, when China reclaimed Hong Kong from the British as a semiautonomous city-state, the Chief Executive has been selected by a small electoral college comprising lawmakers, businesspeople, professionals and others; most are members of Hong Kong’s elite, and most defer to what Beijing wants for Hong Kong. The protesters decried this as an insult to their autonomy, but Lam waved them off, telling them that their proposed alternative was simply outside of Hong Kong’s legal latitude. “Hong Kong is not an independent entity … and cannot decide on its own its political development,” she said. “I hope you have the courage and wisdom to think of a way out of the current situation.” Two weeks later, she told those in the streets they were going to be arrested if they did not pack up and go home.

On Sunday, Lam, 59, was elected Hong Kong’s fourth Chief Executive. She was a beneficiary of the system she had celebrated two and a half years earlier, which was ultimately unchanged by the Umbrella protests: of the 1,200 members of the so-called Election Committee, she took 777 votes. (Hong Kong netizens have since noted with rueful delight that the Cantonese word for seven sounds very similar to a Cantonese slang term for penis.)

Despite Lam’s unpopularity among many Hong Kongers, Beijing had made it clear that she was their preferred candidate, reportedly because she would loyally enact their will. (In February, the South China Morning Post reported that Zhang Dejiang, the senior Chinese official who leads the country’s legislature, was touting Lam as Beijing’s top pick.) Her primary opponent, former Financial Secretary John Tsang, earned only 365 votes, after running a campaign that earned an unprecedented degree of public support.

“They ran good campaigns that taught me a lot,” Lam said of her opponents in her victory speech early Sunday afternoon. “But the work of uniting our society to move forward begins now.”

For many Hong Kongers, these are empty words. The town once celebrated as Asia’s most crucial and cosmopolitan city now faces one of its most uncertain periods in its 170-year history — an existential dilemma strained by its liberal genetic fiber on one side and its political subservience to Beijing’s authoritarian government on the other. The strongman tendencies of Chinese President Xi Jinping have aggravated the situation, as has the leadership of current Chief Executive Leung Chun-ying, under whom Hong Kong has become a deeply polarized society. (Leung did not run for a second five-year term, apparently because Beijing simply deemed him too controversial.) Things have only worsened in the two and a half years since the Umbrella protests: outspoken publishers have been spirited away and wound up in detention on the Chinese mainland; elected representatives who call for the territory’s secession have been barred from taking office. Hong Kong’s people and Beijing’s authorities are caught at an impasse of mutual distrust so intense that many in Hong Kong are now joining the call for outright independence.

The Chief Executive election represented a crossroads of sorts — an opportunity for Beijing to rectify the blunders and oversteps of recent years. For many, this would have meant the selection of John Tsang, 65, an erstwhile establishment figure who has reinvented himself in recent months as an affable moderate populist. Tsang, most recently Financial Secretary, enjoyed the support of nearly half of all adults in Hong Kong, while only around a quarter backed Lam, according to a poll commissioned by the South China Morning Post. “We need to let Beijing hear our voices,” Jacky Tam, a 35-year-old government worker, said at a rally in support of Tsang last week.

“It was an outstanding achievement for a former senior government official,” Willy Lam, a China expert at the Chinese University of Hong Kong, says of Tsang’s celebrity-level popularity. “But Beijing’s most important criteria is still loyalty, and an ability to effectively implement Beijing’s orders. If John Tsang had become Chief Executive, he would have made more compromises.”

In other words, Lam won simply because she would be the more obedient chief executive. To many Hong Kongers, her election confirms that Beijing would rather mollify the discontent here with force rather than compromise.

“Whatever mainland China wants to [impose] on Hong Kong is now quite likely to be achieved,” Irene Tiu, a 24-year-old who works in sales, says. “If I could have taken part in the nomination and the voting, it wouldn’t have been any of these [candidates], and I think many Hong Kongers think likewise.”

“Does the mainland want Carrie Lam? Absolutely,” David Zweig, a political scientist at the Hong Kong University of Science and Technology, told TIME last week. “She’s simply much more reliable on the primary issue, which is political stability in Hong Kong — preventing Hong Kong from becoming an pro-independence hotbed.”

Hong Kong people now face a different crossroads: whether they will succumb to disillusionment and apathy or continue to fight against the system for their democratic freedoms. “I don’t expect more massive protests right now,” Ho-Fung Hung, a sociologist at Johns Hopkins University, says. “The opposition is in ‘low tide’ mode — they will need some time to regroup.”

For the younger, more radical political set in Hong Kong, Lam’s election is further confirmation that the system cannot be changed from within. “This is just a selection made by Xi Jinping’s government,” Joshua Wong, the 20-year-old democracy activist who came to prominence during the Umbrella protests, said on Sunday while demonstrating outside of the complex where the vote was conducted. “It’s an antidemocracy election system. This is why we have to keep engaging in civil disobedience.”

Lam will take office on July 1 — the day that marks the 20th anniversary of Hong Kong’s return to Chinese control. Xi Jinping is expected to travel to Hong Kong to attend the ceremonies. Because the stakes are high, more-moderate experts say, Lam could be enticed to exercise caution.

In her victory speech, Lam struck a humble tone and seemed to realize that she had the hard task of balancing Beijing’s demands with Hong Kong’s aspirations. For now, she said the right things: that she would defend Hong Kong’s freedoms, reach out to those who oppose her, try to heal the deep divisions.

“[Lam] knows this city is completely split asunder,” Emily Lau, a retired pro-democracy legislator, says. “Quite a bit depends on her — whether she’s willing to heal the rift, whether she will act quickly to reach out to civil society and show that she is an inclusive person.”

The question: now that China’s leaders have gotten whom they wanted as Hong Kong’s chief executive, will they let her do her job? “Don’t get me wrong — I am not optimistic,” Lau continues. “I cannot tell the people of Hong Kong that we … should all either start a revolution or just emigrate. But we have to live in hope.” 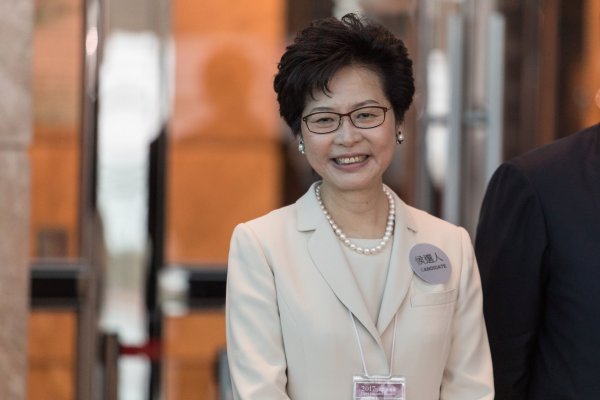