How Lyft Is Capitalizing on Uber's Scandals

This photograph shows the view of the Amp device that passengers will have from outside the car. Personalized lighting displays will be used to help passengers and drivers connect on the street.
Courtesy of Lyft
By Katy Steinmetz

For the companies that believe that touting their values can be a path to profits, these are heady days. Customers have not only come to expect that companies stand for something, in addition to selling whatever they’re selling, but many Americans are more attuned to expressing beliefs through how they spend. And one company posed to reap benefits from that zeitgeist is ride app company Lyft.

“We’re woke. Our community is woke, and the U.S. population is woke,” Lyft President John Zimmer tells TIME, sitting in his five-year-old company’s San Francisco headquarters. “There’s an awakening … Our vote matters, our choice matters, the seat we take matters.”

Many of the millions who have used ride apps live in urban markets where residents were left feeling like their votes didn’t matter in the last election and have turned to their wallets to feel a sense of agency. So when Lyft’s massive rival Uber started becoming the subject of a relentless stream of bad headlines in late January, some users started questioning Uber’s values as a company — and looking around for an alternative.

Lyft did its best to demonstrate that behavior during the final weekend in January. President Trump had just issued his first controversial immigration order, which temporarily banned refugees and limited travel from seven Muslim-majority countries, and taxi drivers were striking in protest at New York City’s JFK airport on a Saturday, along with crowds of angry locals. That evening, Uber sent out a tweet noting that the company was still offering rides to the airport and there would no surge pricing, hikes that typically take effect in times of low supply and high demand.

Though Uber later explained that the move was meant to let riders know they still had a way to catch their flights and to show respect for the taxi drivers — by making sure the company was not profiting off the strike, much like the company limits surge prices during disasters — Internet critics were fast to interpret the move as heartless strike-breaking behavior. A #DeleteUber hashtag started trending Saturday night into Sunday morning, as people shared screen shots of flushing the app off their phones on social media.

By some counts, more than 200,000 users left Uber as January gave way to February, an exodus that Lyft employees started noticing in the form of an influx — one boosted by the fact that Zimmer and Lyft CEO Logan Green decided to make a $1 million donation to the American Civil Liberties Union that same weekend.

Some of the company’s employees cautioned against the donation, suggesting that taking a political stance might alienate some users. “There was risk,” says Zimmer, whose wife is in the U.S. on a green card from Spain, “and that was part of the reason we wanted to take action. It should be more okay to stick your neck out.” The executives scheduled an email on Saturday night that would announce the donation on Sunday morning, as Uber CEO Travis Kalanick said that he would maintain a position on Trump’s business advisory council despite the “unjust” order.

As media stories about the rival companies swirled that weekend, Lyft saw a 40% increase in installations of the app, the company says, and more than a 60% increase in activations of the app (meaning people put in their credit card details so they can actually hail a ride), compared to what might normally be a low single-digit increase week over week.

The pop happened in New York first, says VP of operations Woody Hartman, before spreading to nearby cities like Boston and Philadelphia, and then to the West Coast, “where the ACLU investment, or donation, really resonated.” Hartman says they questioned whether they’d see defectors in more conservative markets like the areas surrounding Atlanta and Dallas, but downloads ticked up there too.

Employees scrambled to alert drivers through emails and texts — both active ones and those that had lapsed— that there would be increased demand, knowing the company had one shot to deliver sufficient supply to new users if they were to keep them around. The operations team offered bonuses to get drivers on the road, and Hartman says that in major markets, Lyft was generally able to hit three-minute-or-less wait times as Sunday evening rides gave way to Monday morning commutes.

That weekend marked a turning point for the company, employees say, one the company has been able to stick to in part because Uber has had so many tough PR days since then.

Some Lyft employees sat in disbelief as a female engineer who left Uber wrote a viral memo alleging sexism and mismanagement at the company; as Uber weathered allegations that it had deceived local government regulators through so-called “greyballing”; as CEO Travis Kalanick was caught lashing out at an Uber driver on a dash cam and made promises that he would “grow up”; and as Uber’s president left after less than a year on the job and early investors wrote an open letter criticizing “toxic patterns” in the company’s culture. Under pressure from riders and company employees alike, Kalanick resigned from Trump’s advisory group.

On a March 21 conference call, Uber board member Arianna Huffington and other company representatives said the company “must change,” as reporters repeatedly asked whether the board was considering asking Kalanick to step down. They acknowledged that relationships with many drivers are “frayed” and that the company was working to engage those workers in a “more human” way. An investigation into company practices by former Attorney General Eric Holder’s law firm is ongoing, they said, expected to be concluded in April, when those findings will be made public and shared with the press.

The ride-app market, including Lyft, has been blasted for plenty as a whole. Both Lyft and Uber have been criticized for their employment practices, including how they deal with worker status. Drivers for both companies have been accused of racially discriminating. Both have been challenged for not releasing reports on company diversity — though both say those are forthcoming.

But Lyft has had a reputation as a more welcoming, friendly company than “other rideshare programs,” as one survey commissioned by the company put it, since the ride-app war began. From early days, Uber and Lyft positioned themselves as different services, even though they provide essentially the same function for customers. Lyft, founded in 2012, was all fist bumps and fluffy pink mustaches, advertising ride-sharing as a way to build community and encouraging drivers to invite riders to sit in the front seat. Uber, launched in 2009, was all black-cars and cool factor, advertising the promise that everyone deserves their own private driver, the type of employee with whom one has little obligation to chitchat.

Lyft’s feel-good vibes certainly didn’t stop Uber from growing into the most valuable startup in the world, worth more than $60 billion, 10 times the valuation that Lyft reportedly is chasing. And Zimmer says it took time for Lyft to realize that a reputation for warmth wouldn’t mean much until the company’s wait times and prices were as just as good as “the other guys.” He says they are competitive on both those factors in U.S. markets now and believes cultural “contrasts are becoming more and more important.”

Lyft has tried to play up those contrasts in the recent past, as in ads released late last year that featured a thinly-veiled “Ride Corp” and painted Lyft as the bright-side alternative to callous guys hatching evil plans in a board room. But Zimmer says the company is done with such attacks. “Let’s be Lyft and let’s focus on our customer,” Zimmer says. “That’s what we can control and that’s what ultimately is going to enable us to win. Honestly. That’s how we are.”

On Sunday, Lyft announced a new feature called “Round Up & Donate” with a splashy ad in the New York Times. In the app, the ad explains, users will have the option to round up their fare to the nearest dollar and donate that money to a specified charity. The ad does not mention Uber by name but says “treating people better” is part of how Lyft does business.

There can be big drawbacks to overtly going after No. 1 in a marketplace when a company is No. 2. “It’s often a thin line in a consumer’s mind between attacking the competitor,” says Rohit Bhargava, who teaches marketing at Georgetown University and runs a firm called the Non-Obvious Company, “and attacking them as a consumer for buying from that competitor.” That’s the kind of strategy better suited to a “very distant” No. 2 or a No. 3 trying to establish itself, he says.

Lyft is still a pretty distant No. 2. After the #DeleteUber hashtag started trending, about 5% of Uber’s market share shifted to Lyft (“It may have been a little more than that,” Zimmer says), according to TXN Solutions, which tracks debit and credit card spending. Still, that meant Lyft was capturing about 20% of the ride app market to Uber’s nearly 80%.

On the conference call, amid the mea culpas, the Uber representatives said the company has still experienced faster growth in the first quarter of 2017 than it did the previous year. Though Lyft now covers areas where more than 70% of the U.S. population lives, Uber reached that point about two years ago. But both have room to grow: though two-thirds of U.S. adults had heard about ride apps by the beginning of last year, according to Pew, only 15% had actually used them.

Georgetown’s Bhargava believes that Uber has benefitted from what he calls passive loyalty, the kind that exists out of convenience and can quickly evaporate when a consumer is given a reason and opportunity to go elsewhere. “And the cost to switch in the case of Uber versus Lyft is pretty low,” he says. “You press a different button and you get your ride.”

Zimmer tells TIME that Lyft now has 40% of the market share in multiple U.S. markets and that however ambitious it may seem, the company is serious about plans to be the top ride-app in the U.S. eventually. When asked how he would characterize the historically fraught relationship between the two companies these days, with headquarters about 15 minutes apart, the talkative Zimmer goes quiet. He pauses for a full twenty seconds. 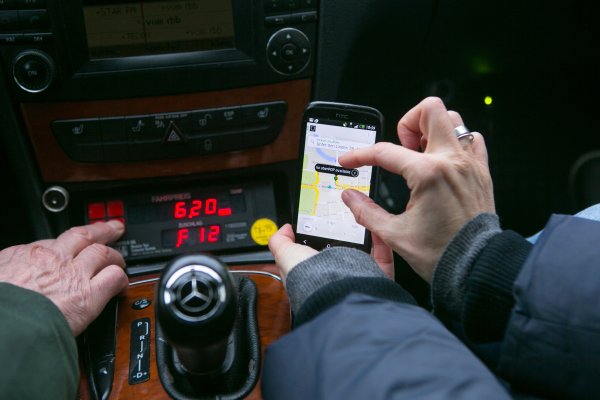 Do Drivers Care About Uber's PR Nightmare?
Next Up: Editor's Pick