Bad at Flirting? 'Ripple' Promises These Tentacles Know When Someone's Checking You Out

In a sad sign of the dark state of human interaction in our modern era, a tech company has developed a new accessory—deemed “Ripple”—that helps determine if someone is checking you out. The hoped-for result? We’ll become better at flirting in real life. Eat your heart out, Tinder.

Ripple is a bold fashion and social statement, an anemone-like set of glittering, pastel tentacles that sit spikily on one’s shoulders via a wire cage, rather like avant-garde football shoulder pads. The wearable supposedly will be able to identify when someone is directing their gaze in the wearer’s direction, sending a “ripple-like sensation” up their back, as TechCrunch reports. If the wearer chooses to seek out that person’s eyes in return, Ripple will “tap” the wearer on the chest once the correct target is identified.

“If the interest is mutual, Ripple perceives these natural reactions and amplifies the flirtatious language by moving in response to the suitor’s gaze,” the project’s site notes, conjuring an image of undulating sparkly tentacles broadcasting one’s excitement to the room via sensors and computer vision technology.

The brainchild of four art and engineering students at Imperial College London and the Royal College of Art, their site suggests the device will “enhance” human-to-human meet-cute potential—as long, of course, as the wearer is willing to be pretty obvious in their attempt to attract a mate, and is OK with receiving lots of electronic caresses as passersby stare in wonder at the colorful contraption perched on their shoulders.

It remains unclear how Ripple would (or could) differentiate between wanted and unwanted attention. Regardless, it’s probably not a great device to test out in a large crowd. 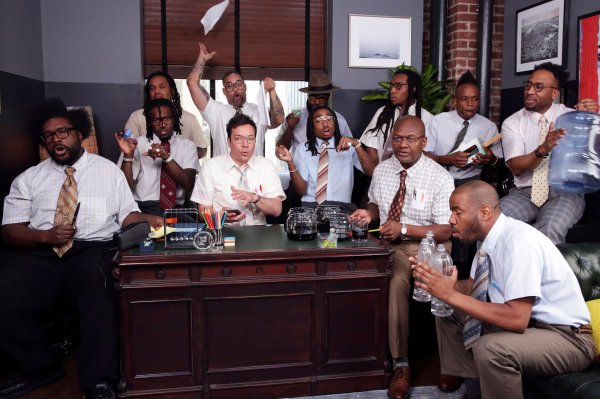 Watch Migos and Jimmy Fallon Use Office Supplies to Perform 'Bad and Boujee'
Next Up: Editor's Pick