Someone spews hatred toward Jewish people every 83 seconds on social media, according to a new study.

More than 382,000 hate-filled messages against Jews were posted on popular social media platforms like Twitter, Facebook and YouTube in 2016, the World Jewish Congress has found. The anti-Semitic missives were posted at an average rate of 44 per hour or one post every 83 seconds, the international group said.

“We knew that anti-Semitism online was on the rise, but the numbers revealed in this report give us concrete data as to how alarming the situation really is,” World Jewish Congress CEO Robert Singer said in a statement. “We hope this serves as a wake-up call to all internet forums to maintain moral standards, rid themselves of offensive content, and make the digital world a safer place for all.”

Sixty-three percent of all the anti-Semitic posts were found on Twitter.

The group’s analysis comes after more than 100 Jewish institutions across the country received bomb threats this year.

Last May, Facebook, Twitter, Google, and Microsoft said they would work with European officials to combat hate speech on their platforms. Another major civil rights group, the Anti-Defamation League, announced earlier this month that it plans to build a command center in Silicon Valley to tackle online hate speech. 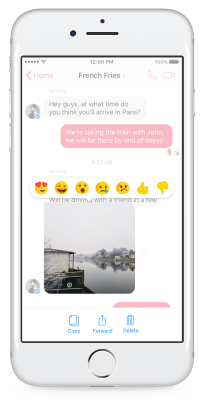 Group Chats Will be Way Easier on Facebook Now
Next Up: Editor's Pick