The past eight years have not been kind to people who dispute that the climate is changing. Leading scientists strengthened the case that the earth is warming and humans are at fault, while the Obama administration prioritized fighting its effects. As with so much else, the election of President Trump has ushered in a new day.

Since taking office, Trump has moved to gut Obama’s signature climate change regulations, signed executive orders to aid the fossil fuel industry and installed a critic of the Environmental Protection Agency (EPA) as its head. And yet to some of the strongest opponents of Obama’s environmental policy, particularly those who deny the existence of global warming, Trump is not going far enough. Despite having called climate change a “hoax” before his election, these critics think Trump has been ducking bigger fights like withdrawing from the international Paris Agreement on climate change and undoing the scientific underpinning for the EPA’s climate change rules.

The schism reflects the larger divide inside the Trump administration between the disruptive nationalists, the establishment figures and the more centrist voices. In the case of Trump’s environmental agenda, those urging him to move even faster see the president’s daughter, Ivanka, her husband, Jared Kushner, and other advisors with New York ties, like Gary Cohn, the director of the National Economic Council, as their chief opponents.

“At some point it needs to be pointed out to President Trump and his administration that the people who elected Donald J. Trump are not wealthy Manhattanites,” said Myron Ebell, who was Trump’s EPA transition chief, “including his children.”

The early signs of the conflict were beginning to emerge in late March, at the Heartland Institute conference at Washington D.C.’s Grand Hyatt Hotel. The annual gathering is something of a summit for leading climate change deniers, and the first one after Trump’s election had the feel of a celebration. “I woke euphoric on the morning of November 9th,” said Jay Lehr, Heartland’s science director. “I have woken up euphoric every morning after.”

But the joy was tinged by worry that Trump wouldn’t be the perfect vessel. In between speeches, activists, policymakers and academics discussed how to pressure Trump into keeping his bold campaign promises. And they fretted over surprising roadblocks.

While the choice of former ExxonMobil CEO Rex Tillerson as secretary of state upset environmental groups, Tillerson has emerged as a comparatively moderate voice in the administration, including advocating for the U.S. to remain in the landmark Paris Agreement. At the Heartland Conference, that stance has erased any residual goodwill from his stint running a multi-national oil company.

“Secretary of State Rex Tillerson think it’s really nice to be able to go to international meetings and pal around with his fellow foreign ministers,” Ebell said. “Rex Tillerson may be from Texas and he may have been CEO of Exxon, but he’s part of the swamp.”

As attorney general of Oklahoma, Pruitt sued the EPA more than a dozen times and he has personally questioned the science behind climate change. Yet, his methodical approach to dismantling many EPA regulations and functions has come in for criticism. While Lehr called Pruitt a “good choice,” he accused him of moving too slowly.

Trump has taken a number of steps to advance his environmental agenda, which includes some of the priorities Ebell laid out in the transition. Trump’s proposed budget defunds a wide range of EPA programs and calls for widespread layoffs. On March 28, he signed a sweeping executive order that calls for the EPA to review the Clean Power Plan with an eye toward eliminating it, kills a metric for assessing the economic effects of carbon dioxide emissions known as the social cost of carbon and rethinks how policymakers consider climate change.

Trump’s actions come as the scientific consensus about the existence and causes of climate change has become virtually unanimous. Nearly every leading nation has committed to address it, while the international business community, including many oil and gas companies, have acknowledged the issue is real and needs to be dealt with.

But you would not know any of that from talking to people at the Heartland conference. Discrediting climate science and the people who practice it was a central aim of many of the conference’s speakers. Their arguments varied. Some acknowledged that humans contribute to warming but said the effect is so minimal it should be ignored. Others disputed that earth is warming at all. And some speakers and attendees argued that carbon dioxide emissions, which leading scientists consider the primary driver of global warming, are actually beneficial to humans and the planet.

These positions hold little water with the mainstream scientific community. A 2013 report from the Intergovernmental Panel on Climate Change (IPCC), the United Nations body charged with reaching a consensus view on global warming, suggests that scientists are essentially 100% certain that global warming is occurring and 95% certain that it is man-made. Scientists say the evidence has only mounted since then.

Still, those who deny the science behind climate change are in a position to influence U.S. policy for years to come. Trump does not have a science advisor and his administration has turned to skeptics for guidance on energy and environmental policy issues. Lehr, who says the greenhouse effect plays a negligible role in the climate, delivered a presentation to administration officials designed to help Trump defend his claim that climate change is hoax.

“Every administration is a mixed bag,” Ebell tells TIME. “I wouldn’t say I’m disappointed. I would say I am anxious.” 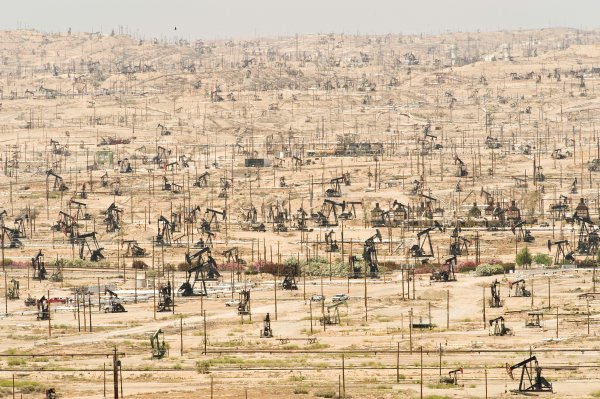