A New London Exhibition Spotlights the Women Who Survived ISIS

A new London exhibition is displaying portraits of Yezidi women who survived violence when living under ISIS.

The #IamYezidi exhibit at the Lacey Contemporary Gallery in the British capital features portraits of women who were kept captive by the terrorist organization and who sat for the photographer Benjamin Eagle.

“We want to tell these women’s stories, to make sure that they’re not faceless,” said Ravinder Singh, the founder of Khalsa Aid, an NGO which helped organize the exhibition.

The Yezidis are an ancient religious minority from northern Iraq, who have been the targets of ISIS genocide, according to the UN. The faith draws on multiple religions, including Christianity and Islam. ISIS militants have separated men and boys from their families and kill those who refuse to convert in an attempt to “exterminate” the Yazidi identity.

The UN’s report found that thousands of women and girls are held captive and are often subject to horrific sexual abuse.

Singh and Khalsa Aid staff work in Duhok, in northern Iraq where many of the women now live in an displaced persons camp. Eagle travelled to Duhok to photograph them. The exhibition features the women’s portraits accompanied by their quotes, which serves to tell a small part of their stories.

“These women have been neglected and ignored. Some of them really want to talk about their experiences.” Singh said. He hopes to bring the exhibit to New York as well as to have a one-day display later this year in the British Parliament.

The exhibition will run until Sunday. 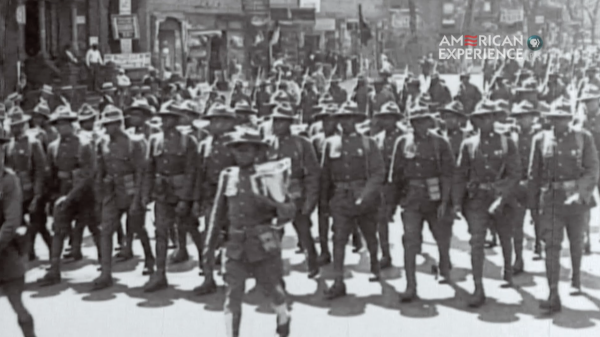 The Surprising Way African-American Soldiers Were Recruited for World War I
Next Up: Editor's Pick