How Difficult Would It Be to Impeach President Trump?

Among his critics, talk of impeachment began long before President Donald Trump even took office.

But questions about impeachment loomed larger after Trump’s former campaign manager and longtime personal lawyer were found guilty of financial crimes in separate federal courtrooms on Tuesday. Michael Cohen, Trump’s former personal attorney, pleaded guilty to eight felonies and testified under oath that he had paid two women to keep quiet about alleged affairs with Trump “at the direction of a candidate for federal office.”

Cohen’s lawyer later connected that plea more directly to Trump. “If those payments were a crime for Michael Cohen, then why wouldn’t they be a crime for Donald Trump?” Lanny Davis tweeted.

While some Democrats have been raising questions about impeachment for months, party leaders have approached the subject with caution. On Wednesday, House Minority Leader Nancy Pelosi told the Associated Press that impeaching Trump was still “not a priority” for Democrats, despite Manafort’s conviction and Cohen’s guilty plea. “Impeachment has to spring from something else,” she said.

But Harvard law professor Laurence Tribe, who recently wrote a book on the power of impeachment and has been a vocal critic of Trump, says Cohen’s guilty plea “changes the landscape dramatically.”

“That, it seems to me, is a very serious crime of the specific kind that the framers thought would merit impeachment and removal from office,” Tribe tells TIME. “That doesn’t mean that the House ought to impeach him for this. That is a judgment call that has to take into account questions like the composition of the Senate and whether the country is ready for the trauma of impeachment. But it seems to me that, at a minimum, this calls on both the House and the Senate immediately to begin investigations into how Donald Trump managed to be elected president and what role the alleged conduct he engaged in through Michael Cohen may have criminally changed the result of the election.”

Before Trump was elected, a law professor argued that lawsuits against Trump University had already laid the groundwork for an impeachment case. A history professor who has accurately predicted every presidential election since 1984 has said Trump’s impeachment is imminent. Calls for impeachment grew stronger in May 2017, after Trump fired FBI Director James Comey and linked the decision to the FBI investigation into possible collusion between Trump associates and Russia. And they grew stronger once again after Trump defended people who associate with white supremacist groups and said “both sides” were to blame for the violence in Charlottesville, Va., that left an anti-racism protester dead in August 2017. Meanwhile, billionaire Tom Steyer has escalated a nationwide ad campaign for Trump’s impeachment, on which he has spent at least $20 million.

But the process of impeaching an American president, much less removing them from office, is quite challenging, as can be seen from the impeachment of President Bill Clinton and the idle chatter of impeaching Presidents George W. Bush and Barack Obama.

Here’s a closer look at how hard the process actually is.

Impeachment talk would need to be taken seriously

Trump’s unconventional political ascent and business background have raised a unique set of ethics questions, but talk of impeachment has been a common part of partisan rhetoric in the past.

Bush and Obama both faced idle impeachment threats that never amounted to anything. People who now believe there’s a serious case for impeaching Trump will have to overcome the reputation established by those who raise the specter of impeachment merely to demonstrate political opposition.

“That makes it harder to separate the wheat from the chaff, so to speak, to figure out what’s really the substantive conduct and the substantive problem,” Michael Gerhardt, a constitutional law professor at the University of North Carolina at Chapel Hill, previously told TIME. “We can’t rely on political rhetoric to guide us because political rhetoric is so overheated.”

Critics would need to settle on one argument

The Constitution states that a president can be impeached if convicted of “treason, bribery or other high crimes and misdemeanors.” Those looking to impeach Trump would need to show he has done something that falls into one of those categories.

While treason and bribery are defined by the Constitution and by federal law, “high crimes and misdemeanors” is a less specific charge. Gerhardt — who served on the transition team for Clinton’s Justice Department and later testified before the House Judiciary Committee on Clinton’s impeachment as a shared witness — said the framers intended it to refer to “political crimes,” including abuses of power or other offenses against the United States. “They don’t have to be technically criminal things — things for which someone could go to prison — but they do have to reach a certain level of seriousness,” he said.

Some of Trump’s critics have argued that his business dealings are in violation of the Constitution’s Emoluments Clause, which prohibits the President from accepting gifts from foreign leaders or governments. Others, including California Rep. Maxine Waters, have argued that the ties between Russia and Trump’s team are signs of wrongdoing. Christopher Peterson, a University of Utah law professor, has said that the Trump University lawsuits provided grounds for impeachment.

But for Trump’s opponents to realistically pursue impeachment, they would likely need to focus on investigating one offense and making a specific, formal accusation of wrongdoing.

There would need to be more evidence

Arguments for impeachment have thus far been resting on potentially flimsy claims. “The critical thing that those congressmen will have to show is that he’s done something that will qualify as treason, bribery, or other high crimes and misdemeanors,” Gerhardt previously told TIME. “That’s the threshold.”

While there are mounting questions about potential coordination between Trump’s campaign and Russian interests to influence the 2016 election, Special Counsel Robert Mueller’s investigation is still ongoing. Pelosi said Wednesday that Democrats should focus on making sure Mueller can finish his investigation and avoid a premature impeachment effort.

“If and when the information emerges about that, we’ll see,” she told the Associated Press. “It’s not a priority on the agenda going forward unless something else comes forward.”

The House would need to decide there are grounds for impeachment

In November 2017, a handful of House Democrats took the first official step by introducing articles of impeachment against Trump, accusing him of obstructing justice, violating the Constitution’s foreign and domestic emoluments clause, undermining the federal judiciary system and undermining freedom of the press. The long-shot effort did not receive support from Democratic Party leaders and was always unlikely to succeed in a Republican-controlled House.

In order to impeach a president, a resolution must pass the House by a simple majority. When the President’s own party has control of Congress — as Republicans do now — that’s a difficult bar to clear. If a vote were to take place today, when there are five vacancies in the House, all 193 Democrats and 23 Republicans would need to vote for impeachment in order for it to pass.

Only two presidents in U.S. history have been impeached: Clinton in 1998 on charges of lying under oath to a federal grand jury, and Andrew Johnson in 1868 on charges of violating the Tenure of Office Act by firing the Secretary of War. Both Clinton and Johnson were Democrats who faced a Republican-controlled Congress, and both were still acquitted in the Senate because opponents failed to gather enough votes in the upper chamber. (Richard Nixon resigned before he could be impeached.)

“The key committee chairs in the House of Representatives are reluctant to take on the President of their own party,” Peterson said of Trump’s situation. “Whether or not they will act depends on how much political pressure is brought to bear on them.”

The Senate would need to find the President guilty

In order to actually be removed from office, the President must then be convicted by a two-thirds vote in the Senate.

When the President’s own party controls the chamber, that’s unlikely to happen unless there is evidence of serious misconduct. Based on the current party makeup in the Senate, 19 Republicans would have to side with all 46 Democrats and two independents in order to remove Trump.

Even Clinton and Johnson, who faced chambers controlled by the opposing party, didn’t provoke a consensus that strong. Both served out the remainder of their terms.

There would need to be public support for impeachment

Impeachment would probably need to be popular in order for Congress to act on it. Trump’s approval rating has ticked up slightly in recent months, but it’s not yet clear how Americans would feel about impeachment. In June, a CNN poll found that 42% of Americans think Trump should be impeached and removed from office — a figure that came close to the 43% of Americans who supported impeaching Nixon in 1974.

During Clinton’s impeachment proceedings, public opinion of Republicans fell, while Democrats and Clinton experienced a surge. When asked whether they wanted Clinton or the GOP “to have more influence over the nation,” Americans were evenly split between the two in September 1998, according to a CNN/USA Today/Gallup poll. But by the time Clinton was impeached in December of that year, the gap had widened significantly. While 60% said they wanted Clinton to have more influence, just 31% said the same for the GOP.

The proceedings also had the unintended effect of sending Clinton’s approval ratings to an all-time high. 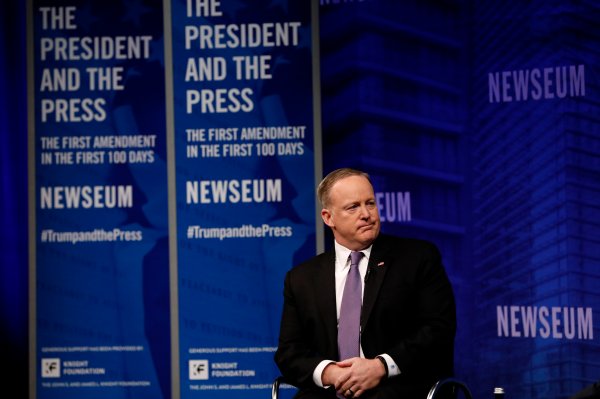 Sean Spicer Apologizes for Hitler Comments
Next Up: Editor's Pick