Russia and the Trump Campaign

On March 20, FBI Director James Comey confirmed that as part of the federal probe into Moscow’s operation against the 2016 U.S. election, FBI agents are “investigating the nature of any links between individuals associated with the Trump campaign and the Russian government, and whether there was any coordination between the campaign and Russia’s efforts.” He declined to elaborate. What we know, so far, from the public record:

Flynn was fired on Feb. 13 after misleading the Vice President about his conversations with Russian ambassador Sergey Kislyak. Routine intercepts of Kislyak’s calls overheard Flynn discussing U.S. sanctions on Russia while President Obama was still in office. According to documents released by the House Oversight Committee, Flynn was also paid over $33,000 to speak at a gala for Russia’s state-run broadcaster RT. The U.S. intelligence community says RT’s English-language arm serves as a propaganda outlet in the West.

Manafort was Trump’s campaign chairman during the pivotal conclusion of the Republican primaries and the start of the general election. He was pushed out of the campaign over concerns about his consultancy work on behalf of ousted Ukrainian strongman Viktor Yanukovych–who was backed by the Kremlin. White House press secretary Sean Spicer sought to play down Manafort’s ties to Trump, saying he “played a very limited role for a very limited amount of time.” Manafort has denied any wrongdoing.

In his confirmation hearings, Sessions told former Senate colleagues that he “did not have communications with the Russians” during Trump’s campaign. But on March 1, the Washington Post revealed that Sessions had met twice with Moscow’s envoy Kislyak while serving as one of Trump’s top 2016 advisers. Amid calls for his resignation, Sessions recused himself from any probe into Russia’s election meddling. Sessions said he did not mean to mislead.

The veteran GOP consultant and longtime Trump confidant admitted to communicating with Guccifer 2.0, a hacking group that claimed responsibility for leaking a stolen trove of Democratic National Committee documents in the 2016 campaign. Stone called his contacts with the group “completely innocuous” and denies having any connections to Russia. Stone recommended that Trump hire Manafort, his former lobbying partner, to help secure the GOP nomination.

In March 2016, Trump identified Page, a former investment banker who has done business in Russia, as a campaign adviser. The following July, Page gave a speech in Moscow in which he criticized U.S. foreign policy to Russia. White House advisers have cast him as a peripheral figure in Trump’s orbit. In a March 8 letter to Senate investigators, Page said he “spent many hours in [Trump] campaign headquarters” in 2016. He has denied any wrongdoing and says he is the victim of a smear campaign.

A well-known figure in Washington, Kislyak regularly interacts with politicians of both parties. Asked at a November event about allegations of Russia’s election meddling, he said, “It is our job to understand, to know people, both on the side of the Republicans and Democrats.”

U.S. law enforcement and intelligence services concluded that Putin ordered an escalating campaign of influence operations targeting the 2016 U.S. election. The goals, according to a January consensus assessment by the intelligence community, were to undermine U.S. democracy, weaken Hillary Clinton and, if possible, help Trump win the White House. The campaign included hacking, fake news and other propaganda. 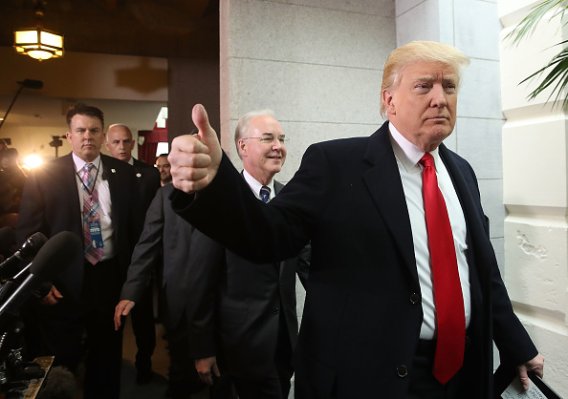 President Trump Faces His First Big Test in Congress
Next Up: Editor's Pick