The U.N. Has Agreed to Investigate Myanmar's Alleged Abuse of Rohingya

The U.N. Human Rights Council agreed Friday to create an international fact-finding mission into alleged rights violations in Myanmar, particularly against the country’s Rohingya Muslims, a stateless minority that has suffered decades of persecution in the western state of Rakhine.

A resolution adopted by consensus says the 47-member council has decided to “dispatch urgently an independent international fact-finding mission” to investigate allegations that may amount to crimes against humanity and ethnic cleansing, “with a view to ensure full accountability for perpetrators and justice for victims.”

The U.N. special rapporteur on human rights in Myanmar, Yanghee Lee, had initially urged the council to establish a full commission of inquiry, the body’s most powerful investigative tool, but members ultimately reached a compromise on a fact-finding mission that Myanmar and its neighbors would be more likely to agree to. While the resolution passed, Myanmar and several other nations, including the Philippines, “disassociated” themselves from the resolution in whole or in part.

The mission will likely focus on events that unfolded since Oct. 9 of last year, when Myanmar’s army and other state security forces began what they called “clearance operations” in the northern part of Rakhine state in response to a deadly attack on border patrols by suspected Rohingya insurgents.

Tens of thousands of refugees poured over the border into Bangladesh in the weeks and months that followed, arriving with harrowing accounts of gang-rape, torture, arson and extrajudicial killing. A U.N. flash report published in early February, based on interviews with more than 200 victims, details the alleged atrocities, concluding the “likely commission of crimes against humanity.”

Amnesty International’s Director for Southeast Asia and the Pacific, Champa Patel, welcomed the “long overdue step” of establishing an international probe, urging the U.N. to “waste no time turning words into action” and to appoint gender-based violence and children’s rights experts to the panel, given the high volume of violations alleged against women and children.

“The people of Myanmar in general and the Rohingya community in particular have the right to know the full truth, as does the international community,” Patel said in a statement to the media.

The Myanmar government, led by Nobel Peace Prize laureate Aung San Suu Kyi, has largely denied the allegations, claiming that the international community is exaggerating the gravity of the events. The credibility and impartiality of domestic inquiries, including one headed by Vice President and former General Myint Swe, has been called into question by U.N. officials and rights groups. The resolution recognized, however, that the Myanmar government “notes the seriousness” of the contents of the flash report, acknowledged domestic efforts to investigate and called on the government to “consider assistance” to strengthen them.

The resolution is the most serious intervention to date into the crisis in Rakhine, an impoverished state bordering Bangladesh where most of Myanmar’s 1.1 million Rohingya live. The rapporteur warned last week that the government “may be trying to expel the Rohingya population from the country altogether.” An estimated 94,000 Rohingya have been displaced since October, most of them to Bangladesh.

Violence between minority Muslims and the majority Rakhine Buddhists in the state capital Sittwe that began in 2012 displaced more than 100,000 Rohingya, most of whom still live in squalid displacement camps which they are not allowed to leave. Lee’s initial request for an inquiry also called for a probe into the events leading up to the 2012 exodus, which remain a mystery.

It is unclear whether the 2012 violence will fall within the scope of the newly established fact-finding mission.

The Myanmar government has kept in place long-standing policies of state discrimination, such as a 1982 citizenship law linking political rights to ethnic identity; restrictions on family life; and excessive regulations governing access to healthcare, education and employment that appear to amount to apartheid.

A commission chaired by former U.N. chief Kofi Annan at the behest of Suu Kyi has been tasked with making recommendations to alleviate the crisis. The panel, which has no investigative mandate, published its initial guidance last week, calling on the government to allow unfettered humanitarian access to all people affected by the recent violence, many of whom have been completely unreachable for more than five months due to the lockdown.

The wide-ranging U.N. resolution adopted Friday also addresses a number of other human rights concerns in the country, notably including an escalation in charges of criminal defamation targeting journalists, politicians and social media users. 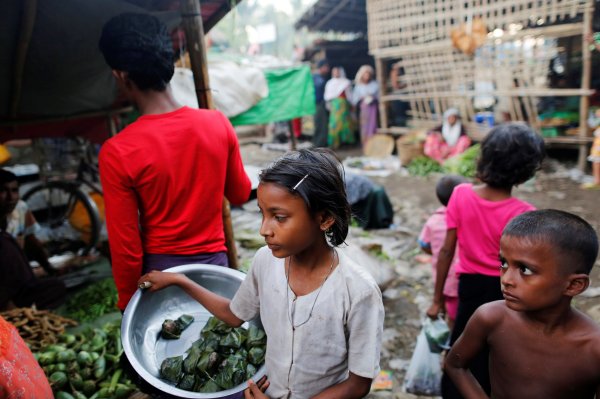