It’s hard to tell if they’ll grow up into star-crossed lovers, but for now, newborns Romeo and Juliet are getting plenty of attention with their fatefully Shakespearean names. The two infants were born just hours apart at the same Bluffton, South Carolina hospital to two separate couples, neither of whom were aware of the other’s delightfully poetic name choice until the hospital’s newborn photographer Cassie Clayshulte happened to snap both babies while they were adorably snoozing.

As far as Clayshulte was able to confirm, the two families—Morgan and Edwin Hernandez, parents to Romeo; and Christiana and Allan Shifflett, parents to Juliet—don’t currently hold an ancient, violent grudge against each other, luckily. So the new Romeo and Juliet’s future looks brighter than that of their literary counterparts.

“Both parents had picked these names out early on in their pregnancies and neither couple knew each other until they met today,” the photographer wrote in a Facebook post with pictures of the newborns. “Both babies have full heads of hair and already make the cutest couple!” And as Clayshulte told USA Today, they’re already hoping for a bit of romantic intrigue in their futures.

“We’ve already made jokes they need an arranged marriage,” she said. “I had told them that if they want to book me now as their wedding photographer, they could do that.” That would be a far cry from the secretive Montague-Capulet tryst of lore. Here’s to finding a better end to their story than that of Shakespeare’s ill-fated pair. 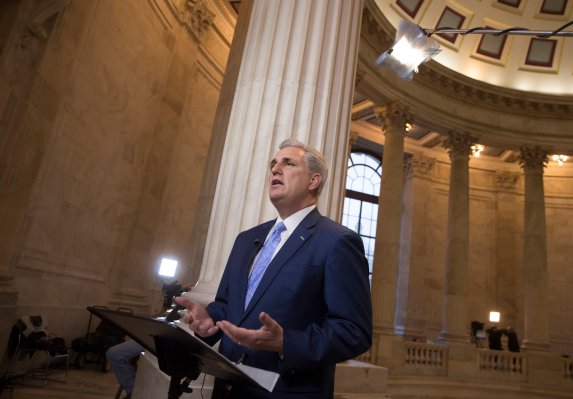 This Congressional Leader's Mom Is So Proud of Him
Next Up: Editor's Pick