A Year After Brussels, ‘Her Face Tells Us Much About That Day’

Flight attendant Nidhi Chaphekar (R) reacts in the moments following a suicide bombing at Brussels Zaventem airport on March 22, 2016 in Brussels, Belgium. Georgian journalist Ketevan Kardava, special correspondent for the Georgian Public Broadcaster, was traveling to Geneva when the attack took place; she was knocked to the floor and began to take photographs in the moments that followed.
Ketevan Kardava—Getty Images
By Olivier Laurent

In the minutes following the twin blasts that left 11 people dead at Brussels’ Zaventem airport, one year ago Wednesday, one photograph came to represent the indiscriminate nature of the terror attack. Taken by Ketevan Kardava, a special correspondent for the Georgian Public Broadcaster network, the image shows Nidhi Chaphekar, a flight attendant for the Indian airline Jet Airways, looking straight at the camera. Blood is running down her face, her shirt has been ripped to pieces. Fear and incomprehension can be read on her face.

The image quickly went viral, making it on the front page of the New York Times. “To see your photo on the front pages around the world, it means a lot,” Kardava told TIME, on the eve of the anniversary. “It means you did something to [inform] others.”

Georgian journalist Ketevan Kardava (L) sits with flight attendant Nidhi Chaphekar on March 19, 2017 in Brussels, Belgium. This is the first time the two have been reunited since terrorists detonated a series of bombs in Brussels airport, March 22, 2016.
Ketevan Kardava—Getty Images

Yet, in the days following the attacks, Kardava had to defend her actions. On social media, she was criticized for showing Chaphekar as a victim. “Much was said about this photo’s impact,” said Kardava. “So I wanted very much to meet with Chaphekar.”

Her wish came true this week when the two women met for the first time ahead of Belgium’s one-year-anniversary commemorations. “It was a relief for me to talk about this tragic moment,” she said. “She told me she saw this picture at the hospital. Her husband told her that’s how they found out she was alive after the attack.”

While Chaphekar admitted to Kardava that it was difficult to see herself in such a state, she also said she was grateful that the image exists. “She agrees that her face tells us much about that day,” the photographer said.

These attacks — and the chaos that ensued — still haunt Kardava today.

“Every time when I’m traveling from Brussels, every time, I don’t want to have a look on this part of the airport,” she said. “Everything – these memories are very fresh even after a year. It’s really difficult, but life goes on.” 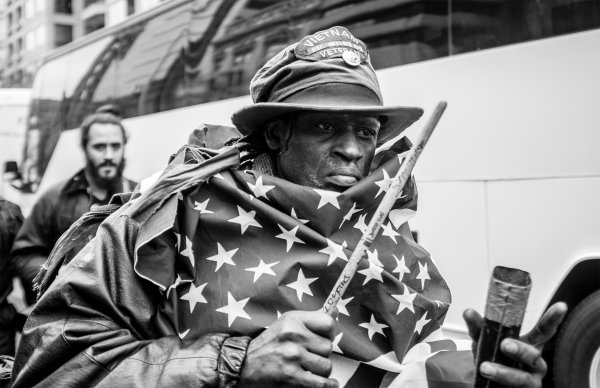 How One War Veteran Uses Photography to Manage his PTSD
Next Up: Editor's Pick