An Unexpected Encounter in Mosul's Ruins

A boy rides his bike past destroyed cars and houses in a neighborhood recently liberated by Iraqi security forces on the western side of Mosul on March 19, 2017.
Felipe Dana—AP
By Andrew Katz

Ten minutes had passed before the boy appeared out of nowhere and into the frame. Felipe Dana, an Associated Press photographer shadowing Iraqi forces in western Mosul, was naturally drawn to this surreal scene: the shell of a car somehow perched atop the shell of a house in this shell of a neighborhood. The guts of another vehicle, on ground level, were on full display. Then, the boy on the bike.

The way Dana tells the story, it sounds like he saw a ghost. Judging by the way the boy gazes toward the man behind the camera, it appears he saw one too.

It was more than a week into his second stint of the offensive to wrestle control from Islamic State fighters. His first jaunt in Iraq came late last year during the initial push into the eastern section, which Iraqi officials announced in late January had been liberated. The current fight for the western half, with its dense civilian population and narrow streets, was expected to be far more brutal. Blood has spilled with every inch gained.

At a train station about a kilometer from a nearby front line, Dana says residents who fled their homes told of bodies in the streets. More than 750 civilians have been killed in the month of fighting in the western areas, the AP reports, citing medics along the front line. That’s in addition to the 1,600 estimated killed in the 100-day offensive for the eastern half of the city.

It was on his way out of Mosul, around 2 p.m. on March 19, that he came across the car resting atop the house. His vehicle drove past the scene, then parked a block away. The street appeared to be abandoned. Dana double-checked a map to make sure it was secure to walk in the area, and then asked some officers he saw nearby, who confirmed it.

At one point, angling for a better vantage point alongside a cameraman, Dana climbed onto a house across the street. After pointing his lens back toward the scene, the boy on the bike rode by. “It was a kind of reaction and I shot a couple of frames,” Dana says. “We didn’t expect to see anyone, especially a boy, riding peacefully through this. In a normal situation, it would be full of people everywhere. When you walk through it [now], you think it’s a ghost town.”

The dangers of working amid street warfare have made it difficult for Dana to get too close to the action: “One of the biggest challenges I have is to show how dramatic, and how massive, the destruction is.” What this picture does well is illustrate the horrors from which thousands have fled—and the unfathomable idea that many, in fact, have stayed in their homes.

“This boy is clearly not fleeing,” Dana says. “He’s living in this place.”

Felipe Dana is an Associated Press photographer based in Brazil. 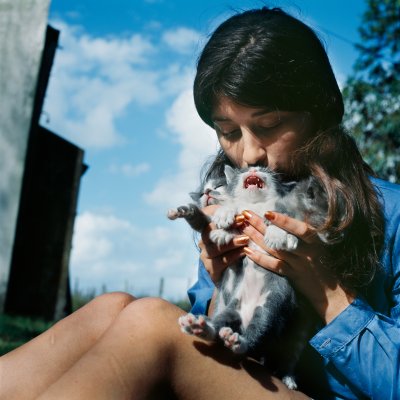