President Trump Fails to Convince Some Republicans to Repeal Obamacare

In a full-court press to repeal Obamacare, President Donald Trump summoned moderate lawmakers to the Oval Office on Tuesday afternoon to try to convince them to support the Republican health care bill.

The president sat with the 15 moderate Republicans in the Oval Office during an intimate meeting, emerging from behind his desk and joining them in a scrum of chairs. He listened carefully to their concerns and gently reminded them of Republicans’ promises to repeal Obamacare.

He did not change many minds.

“I do think we need to go to a different system, but I don’t think this bill is good enough,” said Rep. Leonard Lance of New Jersey, one of the moderates who attended the meeting. “I am a no.”

The clock is ticking for Republicans to pass their Obamacare replacement, called the American Health Care Act. The House is set to vote on the replacement on Thursday, and it is far from certain that Republicans will get their bill passed.

Moderates are concerned that the Republican replacement put forward by House Speaker Paul Ryan and President Donald Trump would hurt their constituents by causing them to lose health insurance, and would leave current Medicaid recipients uninsured.

Some are pushing for a bill that does not freeze the Medicaid expansion in 2020 or cut Medicaid spending as dramatically, others for more larger tax credits, and still others to remove language defunding Planned Parenthood from the legislation.

So far, President Trump has been unable to lock down the votes needed to pass the bill.

“Nobody jumped up and said I’m a no, but now I’m a yes,” said Rep. Dan Donovan of New York, who attended the meeting with President Trump and is undecided about the bill. “Maybe now they’re contemplating what was said in the meeting and now coming to their conclusions.”

Rep. Charlie Dent of Pennsylvania, co-chair of the moderate Tuesday Group, also left the meeting without announcing who he would vote, despite changes made in the Republican bill designed to bring him and his moderate allies into the fold.

Earlier on Tuesday, Trump visited Capitol Hill and spoke to the entire Republican House conference, imploring them to repeal the law.

“I honestly think many of you will lose your seats in 2018 if you don’t get this done,” Trump said at the larger meeting in the morning.

But the hard-right members of the House Freedom Caucus went out as opposed to the bill as they were going in.

“If the vote were today, it would not pass,” said Rep. Mo Brooks of Alabama, a Freedom Caucus member who is opposing the bill. “And it would be a significant comfort zone.”

Now the problem is that Republicans from both sides are closing in on the bill, with moderates like Donovan and Lance questioning the bill, as are conservatives. “I’d say we got roughly 30 conservatives and 20 throughout the conference” said Rep. David Brat, “who are leaning no, to no.”

“They’ve done some constructive stuff,” he said, “but the price [of premiums] has to come down.” 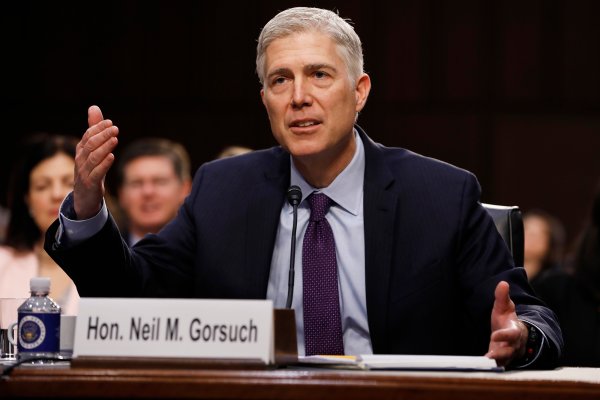 Gorsuch Had a Tense Exchange Over Maternity Leave at Hearing
Next Up: Editor's Pick