Democrats Accuse Neil Gorsuch Of Not Looking Out for the 'Little Guy.' Here's His Defense

Judge Neil Gorsuch defended his judicial record on the first day of his confirmation hearing, preempting attacks by Democrats who accused him of being insensitive to the human side of his cases.

Giving an opening statement to the Senate Judiciary Committee Monday afternoon, President Trump’s nominee to fill the open seat on the Supreme Court said he has tried to “treat all who come before me fairly and with respect.”

“I’ve ruled for disabled students, for prisoners, for the accused, for workers alleging civil rights violations, and for undocumented immigrants,” he testified. “Sometimes too I’ve ruled against such persons. My decisions have never reflected a judgment about the people before me, only a judgment about the law and facts and issues in each particular case. A good judge can promise no more than that, and a good judge should guarantee no less.”

Gorsuch’s comments came after nearly four hours of opening statements by the Senators on the committee and responded to Democratic concerns that he often sides with corporations at the expense of individuals.

“I have not seen that the rights of minorities are a priority for you,” Democratic Sen. Mazie Hirono of Hawaii said to Gorsuch in her opening statement. “In fact, a pattern jumps out at me. You rarely seem to find in favor of the little guy.”

Multiple other Democrats cited the so-called “frozen trucker” case, in which Gorsuch dissented against a man who was fired for abandoning his truck in sub-zero temperatures when he feared for his health. That freezing night was “not as cold as your dissent, Judge Gorsuch,” Democratic Sen. Dick Durbin of Illinois said pointedly.

But Gorsuch advanced a conservative vision of his role as a judge and possible future justice, arguing that even if he doesn’t like the result of a case, that does not mean the legal reasoning isn’t sound.

“If judges were just secret legislators, declaring not what the law is but what they would like it to be,” he said, “the very idea of government by the people and for the people would be at risk.” And he said Justice Anthony Kennedy taught him that “a case isn’t just a number or a name, but a life story.” (Gorsuch once clerked for Kennedy and if he’s confirmed, the two would become the first ever justice and former clerk to sit on the Supreme Court together.)

Gorsuch also presented statistics to sway Democrats who say they’re trying to determine whether he’s in the legal “mainstream,” the criteria Democratic leader Chuck Schumer set forth for his confirmation.

Monday marked the first day that senators have had the chance to publicly probe the Supreme Court nominee after more than a month of private meetings— Gorsuch laughed when dozens of cameras swarmed him and began furiously clicking as he took his seat. But Tuesday is when the conflict will begin in earnest, as Gorsuch faces his first day of questioning.

Committee head Sen. Chuck Grassley predicted the first round of questioning will last for about 10 hours, and joked that he would appreciate it if he could be home for his preferred 9 p.m. bedtime. 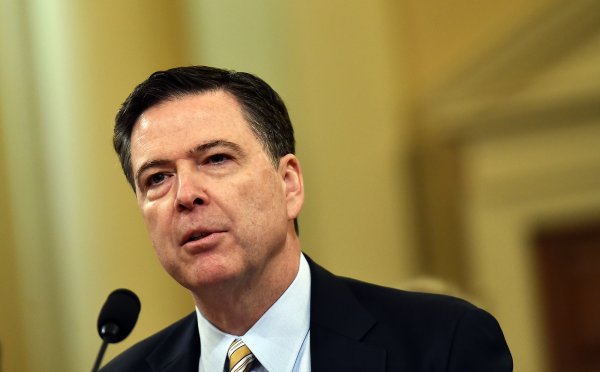 People Are Searching for 'Gravamen' after FBI Director James Comey Uses the Word to Describe Watergate
Next Up: Editor's Pick