How Airbnb Is Spurring Innovation In Luxury Travel

There is now a cottage industry of short-term-rental start-ups, whether started before or after Airbnb. The category includes dozens of other companies: Roomorama, Love Home Swap, Stay Al­fred, and many more. Some were scooped up by the travel industry’s giants—TripAdvisor’s FlipKey and HouseTrip, Priceline’s Booking.com — and in the fall of 2015, Expedia paid $3.9 billion for industry veteran HomeAway and its 1.2 million–plus properties listed.

Some new entrants are starting to offer their own twist on the concept, evidence of the kind of segmentation that starts to happen when a bold new idea becomes more established. Onefinestay was the first to get significant traction. Founded in 2009 by three friends with backgrounds in tech and business, the company created its own niche in high-end, high-touch short-term rentals (it’s often described as “the posh Airbnb”). Would-be hosts have to apply to have their res­idences accepted (and need to meet certain standards, like a certain number of wineglasses on hand and a certain thickness of the mat­tress). Each of the properties in its collection is visited by the com­pany’s staff in advance of any booking and given a luxury makeover: it’s cleaned and de-cluttered, the bed linens are replaced and appro­priately anonymized and staged with fluffy duvets and high-end bed linens, and shampoo and soap are provided.

The company, which bills itself as the “unhotel,” deploys employees to greet customers at check-in and offers white-glove treatment on the ground, including a personal iPhone to use during their stay, a 24-hour remote concierge, and room service delivered by a network of providers. This high-service model isn’t as scalable, since every property needs to be approved and then given its luxury patina, so for now its 2,500 listings are available in only ten cities; but, like Airbnb, it has grown largely by word of mouth.

In 2006, Parker Stanberry was living in New York City and had just been laid off from Miramax Films in the wake of its split from Disney. He decided to move to Buenos Aires for three months and needed to find a place to stay. After going through a clunky process involving real estate brokers and Craigslist, he found a place, but once on the ground there, he found himself missing a level of ser­vice, in particular the personalized touches and lively bar and social scene that a boutique hotel provided. He came up with the idea for Oasis, a business that would bring the elements of a boutique hotel to the world of short-term apartment rentals. Airbnb didn’t exist at the time, but Stanberry’s approach was different; it was smaller, did not involve peer-to-peer hosting, and was more service-oriented, with a staffer on-site to check guests in and out, member “clubs” accessible nearby, and free passes to SoulCycle and the like. He calls the model a “deconstructed boutique hotel” (or, as he describes it in compari­son to Airbnb, “removing some of the uncertainty with great stuff layered on top”). Oasis now has two thousand listings in twenty-five cities — its prices start at around $120, so it offers more of a broad range than onefinestay — with a goal of reaching one hundred cities. (It lists many of its properties on other sites as well, including Airbnb and HomeAway.)

Oasis has had some successes: during the Summer Olympics in Rio in 2016, the company housed groups from Nike, Visa, and the BBC. “They can come to us and say to one central point of contact, ‘We need thirty midlevel units for staff, fifty high-end for VIP retail­ers, and a few villas for athletes and CEOs,’ ” Stanberry says. “And we can do that.” He acknowledges that there is a “gold rush” for short­term-rental sites in the wake of Airbnb’s success. “It’s pretty easy to raise $1 to $3 million in a Series A and give it a whirl in San Francisco or London,” he says. “But to actually build something that’s differen­tiated enough and scale it is harder.”

Another just-launched hybrid: Sonder, the relaunch of a previ­ous company, Flatbook, which bills itself as a “hometel,” a short-term rental with the touches of a hotel. Like the others, it takes aim at what it sees as a flaw of inconsistency with larger short-term-rental sites (i.e., Airbnb). It recently raised $10 million in funding. New twists on hotels, too, are emerging, companies like Common, a model of flex­ible, shared housing with outposts primarily in Brooklyn; and Arlo, a new hotel brand that calls itself “homebase for urban explorers.”

It’s all part of the rapid mainstreaming of the fast-growing cat­egory of “alternative accommodations,” and plenty of players in the hospitality industry want in on it. There are many ways to slice it, and in a curious number of these cases, the websites’ designs, friendly voices, and review systems all bear an uncanny resemblance to Air­bnb. But the idea of something that’s not your father’s hotel room has taken hold. “It’s a really relevant and growing space in the accom­modations pie,” says Stanberry of Oasis. “And there’s no question it continues to grow.”

Of course, there will always be a market for hotels, even a robust one. Many people would never be caught dead staying in someone else’s home or apartment, no matter how high-end the service. Marriott’s Arne Sorenson observes that one reason Uber has taken off is that the level of quality it offers is dramatically higher than that of a taxi, which can be “awful” and, in many cities, hard to find. “In the hotel business,” he told Surface magazine, “I still think we can deliver bet­ter service, so we don’t have quite the same risk.” David Kong, CEO of Best Western, points out the many things hotels provide that Airbnb can’t: the lobby, a social gathering space; a staff member to greet you; the ability to call the front desk and request an extra blanket or have something fixed if it’s not working. “You can only find that in a hotel,” he says.

A former colleague of mine for whom travel has been a lifelong passion swears off anything related to staying in someone’s home. “I want a place that’s bigger than my own apartment, with crisp white sheets, a big TV, and really good air conditioning,” she says. And she adores room service: “I love how they roll in the cart, the vase with flowers, everything.” If she has a noisy neighbor or something doesn’t work, she likes knowing she can call the front desk and they will send someone to fix it or give her a new room. I can see her point: when I can afford the splurge or when my company is paying the bill, I love staying in upscale hotels; there’s a reason the Airbnb host I stayed with in Georgetown referred to me as the “Four Seasons lady.” And while Nike used Oasis for some of its travel needs during the Olym­pics, Stanberry points out that the company also booked plenty of hotel rooms, essentially commandeering one of the city’s hotels for its workers.

There’s no question the hospitality landscape is changing be­fore our eyes. One former hotel-industry top executive who says he, too, was initially dismissive of the threat posed by Airbnb and its ilk, says in hindsight he now understands why. “I superimposed my own forty-something personal preferences,” he says. “What about the sheets, the mattress? How would I get the key? I had all the fears of an older person.” The younger generation, he says, has grown up with­out the fears and biases that he had — and has known only a world with Airbnb in it. Young people are “Airbnb native” in the same way they are “digital native”; for many in this group, staying in a chain hotel room is as foreign as talking on a landline, walking into a bank branch, or watching a television show at the actual time it airs. “Air­bnb educated an entire generation,” the executive says. And the com­pany’s hand becomes even stronger, he says, the more it’s able to use its data to accurately predict and deliver exactly what its consumers want. “I would not bet a cent against Uber or Airbnb,” he says.

Leigh Gallagher is an assistant managing editor at Fortune, co-chair of the Fortune Most Powerful Women Summit and the author of The Airbnb Story and The End of the Suburbs.

Excerpted from The Airbnb Story: How Three Ordinary Guys Disrupted an Industry, Made Billions . . . and Created Plenty of Controversy by Leigh Gallagher. Copyright © 2017 by Leigh Gallagher. Used by permission of Houghton Mifflin Harcourt Publishing Company. All rights reserved. 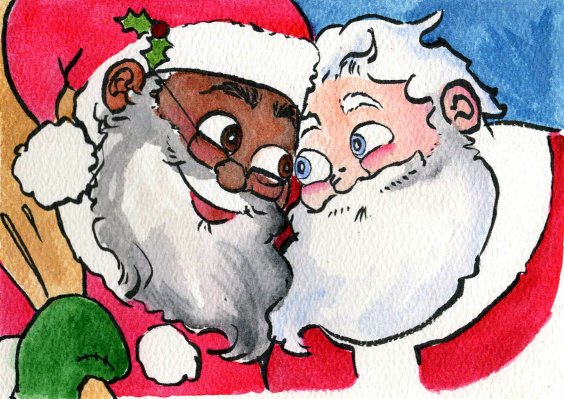 Santa Is a Gay Man in an Interracial Relationship in This New Picture Book
Next Up: Editor's Pick