Want America to Be 'Great' Again? Pay For It

The shadow of an airline is displayed on Highway 405 seconds before landing in Los Angeles international airport on Feb. 22, 2017.
Daniel Slim—AFP/Getty Images
Ideas
By Patrick Jones
Jones is the Executive Director and CEO of the International Bridge, Tunnel & Turnpike Association, the worldwide association for operators of toll road, bridge and tunnel facilities and the businesses that serve them.

Elon Musk recently announced that he is fed up with traffic in Los Angeles and will soon begin boring a tunnel under the city to relieve congestion. As a billionaire and innovator, Musk has the resources to make something like this happen. But even if he bores his tunnel, where does that leave the rest of the country with its congested highways, crumbling bridges, aging water systems and fragile power grid? One big push in L.A. doesn’t solve the problems of an entire country struggling under the burden of billions of dollars in deferred maintenance. We need a national vision to pay for and revitalize our infrastructure for all Americans.

For decades, my association and many others have urged Congress and the states to make much bigger investments in our vital infrastructure. But we are still far behind where we would like to be. The problem is us. We say we want better roads and safer drinking water. But year after year, we refuse to come up with the money to make the big improvements that we need. Yes, some states and local governments have taken it upon themselves to raise revenue. But that isn’t enough to meet all our infrastructure needs.

But there is hope. President Donald Trump has shined a bright light on infrastructure. During the campaign, his inaugural address — and most recently, his Joint Address to Congress — he emphasized his commitment to rebuild roads, bridges and schools. Last October, his advisors published a paper that proposed $1 trillion in new infrastructure investment over ten years by offering tax credits to private investors. And recently, Senate Democrats introduced their own $1 trillion plan to repair crumbling roads, rebuild schools and do more while creating over 15 million new jobs.

As hopeful as these proposals are, there is a big problem: They are heavy on vision and light on details, specifically how to pay for them. Paying for a grand plan is always the sticking point. Those who advance these proposals don’t want to talk about “pay-fors” until the last minute, because they want to limit the opportunity of their adversaries to oppose them. So, we get the big vision first in the light of day, and the messy sausage-making of pay-fors in the dead of night.

And who’s to blame for this? The American people. It may seem that Congress and the President are pursuing wicked ends through clandestine means when they wrap up a deal with pay-fors at the eleventh hour. But they are simply following our lead.

Consider this reader comment in response to a recent newspaper article describing Americans’ reluctance to pay user fees to rebuild infrastructure. The reader said, “Americans want first class roads but don’t want to pay for them. Well, folks, nothing is free. No one will provide these things without taxes or user fees.”

In response to this attitude, Congress and the President have twisted themselves into unnatural shapes to say to voters, “Yes, we’re going to rebuild your infrastructure,” and “No, we’re not going to raise taxes or fees to do it (well, maybe just a little).”

This Harry Houdini act must end. We can’t rebuild our infrastructure if our elected leaders are forced to carry out our will wrapped in a straitjacket and submerged in a glass coffin rapidly filling with water. This tableau makes for great theater but lousy public policy.

Having a grand infrastructure proposal without a means to pay for it doesn’t solve the problem. It merely names the problem and a happy end state, without any of the hard work needed to get to the end. We need to be honest with each other and make sacrifices now to ensure a better future. Sacrifice in this case means money, with Americans paying more than they pay today in exchange for better infrastructure.

It’s time to treat the American people like adults and explain the need for bigger investment in the form of taxes and user fees. Adults understand that there is no free lunch and there are no free roads. Let’s have an honest conversation that starts like this: We are going to build and maintain the finest infrastructure in the world and we, the American people, are going to pay for it. 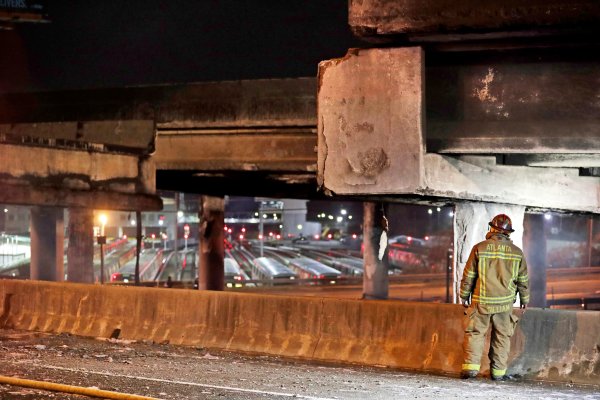 The Deadliest U.S. Bridge Collapses Over the Past 50 Years
Next Up: Editor's Pick