Sesame Street's New Muppet Has Autism, and 3 Other Times the Show Taught Kids about Diversity

Sesame Street’s newest muppet Julia, a 4-year-old girl with autism, will appear in an episode of the show for the first time next month, becoming the latest character to teach young viewers about diversity.

The addition of Julia is, in part, an effort to normalize the different ways children with the disorder interact with their peers. And the puppeteer behind Julia has a personal connection to the role because her son has autism.

“Had my son’s friends been exposed to his behaviors through something that they had seen on TV before they experienced them in the classroom, they might not have been frightened,” Stacey Gordon said in an interview with 60 Minutes on Sunday. “They might not have been worried when he cried. They would have known that he plays in a different way and that that’s OK.”

Sesame Street, which first aired in 1969, has a long history of introducing characters that demonstrate a range of challenges, lifestyles, backgrounds and experiences.

Zari, a 6-year-old Afghan girl with a multi-colored wig, debuted last year as a muppet on Afghanistan’s version of Sesame Street, called Baghch-e-Simsim. The show’s creators said they were aiming to promote female empowerment, giving young girls a role model in a country where women’s lifestyles and educational opportunities continue to be restricted.

“The exciting part about Zari is that she is modeling for young girls that it is wonderful to go to school and that it’s OK to dream about having a career,” Sherrie Westin, Sesame Workshop’s executive vice president of global impact and philanthropy, told Reuters in an interview at the time.

In 2013, Sesame Street introduced Alex, a muppet whose father was in prison — making the character relatable to more than 2.7 million American children who had a parent in jail or prison at the time.

“We’re tackling this very difficult topic, but also acknowledging this very invisible community,” Jeanette Betancourt, vice president for outreach and educational practices at Sesame Workshop, told USA Today at the time. “We’ve heard quite a bit from adults who experienced this as children and who never talked about it out of guilt or shame.”

Alex was not part of the regular TV show, but he was included in a set of tool kits aimed at helping kids handle bigger challenges, including bullying, divorce, sibling rivalry and parental incarceration.

Kami became Sesame Street’s first HIV-positive muppet in the early 2000s, taking on a starring role in the show’s offshoots in South Africa and Nigeria, where the show aimed to break a stigma around HIV and AIDS.

“Do you tell everybody that it is OK to hug someone who is HIV-positive, like me?” Kami asks Clinton.

“I sure do, Kami,” Clinton responds, before hugging her and encouraging parents to talk to their children about HIV and AIDS. 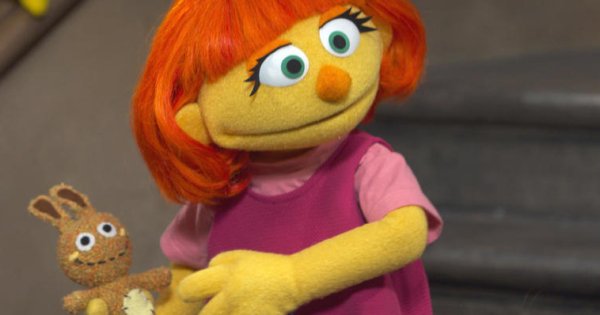 Sesame Street Is Introducing a Muppet With Autism
Next Up: Editor's Pick