At least 80 Roman Catholic dioceses across the United States have said it’s OK to enjoy corned beef and cabbage on St. Patrick’s Day this year — despite the fact that the holiday falls on a Friday during Lent, when practicing Catholics are typically required to abstain from eating meat.

As of March 9, more than 80 of the nearly 200 dioceses in the U.S. had announced a St. Patrick’s Day exemption to the no-meat rule, according to the Catholic News Agency. That gives Catholics permission to eat corned beef and cabbage, a meal traditionally served in the U.S. on St. Patrick’s Day. Archdioceses in New York City, Boston, Philadelphia, Chicago and San Francisco are among those that have granted a dispensation.

Exemption details differ by diocese, and Catholics have been advised to check in with their local parish. Some church leaders have asked Catholics to, instead, abstain from eating meat on another day this week or to perform an additional act of charity.

“If a Catholic residing in the Archdiocese of New Orleans wishes to participate in St. Patrick’s Day activities and desires to eat meat, they may be dispensed and choose another day of the week for abstinence or may choose to perform an act of penance that is a greater sacrifice,” New Orleans Archbishop Gregory Aymond said in a statement to priests reported by the Times-Picayune.

Archbishop Bernard A. Hebda, who leads the Archdiocese of St. Paul and Minnesota, encouraged churchgoers to perform another act of penance, according to the Catholic News Service.

“When you get a dispensation — and I think it’s coming — you should do penance on another occasion,” Hebda said last month. “So, it’s like a get-out-of-jail-free card, but you have to pay sometime.” 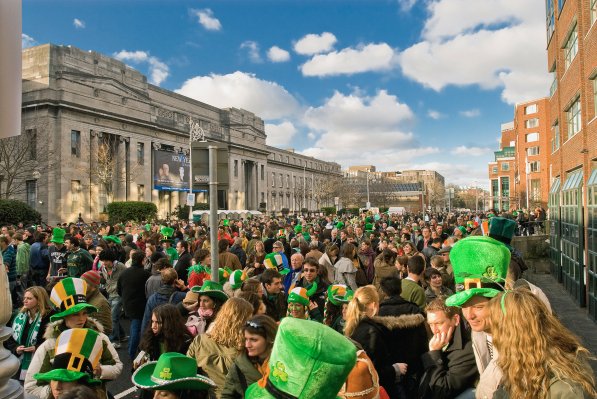 Watch Live: Thousands Come Out for St. Patrick's Day Parade In NYC
Next Up: Editor's Pick