In the closing moments of the first official teaser for Game of Thrones‘ seventh season, an ominous new line of dialogue from Jon Snow hints at a coming battle.”There is only one war that matters. The Great War,” he says as the camera pans out to reveal the signature blue eye of a White Walker. “And it is here.”

This isn’t the first time a character has referenced the Great War. Just before Jon banishes Melisandre from the North in the season six finale, the Red Priestess pleads with him to let her live despite the fact that she killed Shireen. “You’ve seen the Night King, Jon Snow,” she says, referencing Jon’s encounter with the leader of the White Walkers at the Battle of Hardhome. “You know the Great War is still to come. You know the army of the dead will be upon us soon. And you know I can help you win that war.”

Thrones seems to have been teasing the impending conflict between the living and the Others since the series’ very first scene, when three rangers of the Night’s Watch are attacked by a White Walker beyond the Wall. But to truly grasp what’s at stake in the show’s final two seasons, it’s important to understand the history of the White Walkers’ relationship with the people of Westeros.

Thanks to Bran’s training with the Three-Eyed Raven, we now know that the Children of the Forest created the White Walkers — from men — to defend themselves against the invading First Men. However, during a dark and terrible winter known as the Long Night, the White Walkers turned against the Children, descended from the North and began killing everyone in their path.

“Thousands of years ago, there came a night that lasted a generation,” Old Nan tells Bran in the third episode of season one. “Kings froze to death in their castles, same as the shepherds in their huts; and women smothered their babies rather than see them starve, and wept, and felt the tears freeze on their cheeks… In that darkness the White Walkers came for the first time. They swept through cities and kingdoms, riding their dead horses, hunting with their packs of pale spiders big as hounds.”

The Children and the First Men eventually joined forces to fight the dead, bringing about the War for the Dawn — a conflict in which a legendary figure known by the names of the last hero and Azor Ahai wielded the flaming sword Lightbringer to lead the living to victory. It was then that the Wall was constructed and warded with magic to prevent the Walkers from crossing back over from the northernmost regions of the continent.

However, since Thrones began, the show seems to have been foreshadowing a renewed attack by the Walkers — with some predicting their efforts will finally take the Wall down in season seven. In fact, HBO’s most recent season seven promo simply zooms out on what appears to be the same eye — that of the Night King — from the original teaser, seeming to put even more emphasis on his role in what’s to come.

But all hope is not yet lost, as both Jon and Daenerys have been declared the One Who Was Promised — a prophesied savior in the religion of R’hllor who is the reincarnation of Azor Ahai — by two different Red Priestesses of the Lord of Light, Melisandre and Kinvara, respectively. In all likelihood, this means that one of them is fated to lead the people of Westeros against the Walkers for the second time in history. 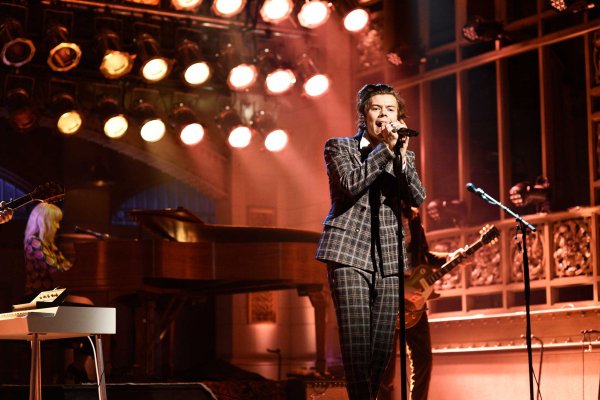 Harry Styles' Solo Album Is an Unexpected Tour of Rock History
Next Up: Editor's Pick