Attorney General Jeff Sessions said in remarks prepared for delivery this week that he believes marijuana is “only slightly less awful,” than heroin.

“I realize this may be an unfashionable belief in a time of growing tolerance of drug use. But too many lives are at stake to worry about being fashionable,” reads his prepared statement Wednesday during an appearance with local and federal law enforcement officials in Richmond, Va. “I reject the idea that America will be a better place if marijuana is sold in every corner store. And I am astonished to hear people suggest that we can solve our heroin crisis by legalizing marijuana — so people can trade one life-wrecking dependency for another that’s only slightly less awful. Our nation needs to say clearly once again that using drugs will destroy your life.”

Sessions veered from the script and did not say marijuana is “only slightly less awful” during his speech, though it remains in the remarks on the Department of Justice website. Scientists who study marijuana disagree with his position.

“The statement flies in the face of the science,” said Dr. Donald Abrams, a professor of clinical medicine at the University of California San Francisco, who has studied the health effects of marijuana. “No one has died from an overdose of cannabis. There’s abundant evidence that it is a useful intervention for chronic pain, and we may see it’s useful in harm reduction.”

In the United States, more than half-a-million people have died from drug overdoses from 2000 to 2015, and currently an estimated 91 people die every day from an opioid overdose.

In January, the National Academies of Sciences, Engineering, and Medicine released a committee review of all research on the health impacts of cannabis since 1999, and reported that there’s substantial evidence to suggest marijuana can help people dealing with chronic pain — and that it could be an alternative to opioids. (Abrams served on the committee.) A 2015 analysis published in the Journal of the American Medical Association reported a 30% or more reduction in pain from cannabinoids — compounds from cannabis — compared to a placebo. Studies suggest cannabinoids interact with receptors in pain activity centers located in the brain and spinal cord, and may have anti-inflammatory effects.

In the U.S., marijuana is classified as a Schedule 1 drug, meaning it has a high potential for abuse. Many researchers argue that classification isn’t supported by evidence, and that it makes marijuana harder to study. While opioid addiction tends to be long-term and difficult to successfully overcome, a 2015 study found that after three years, 67% of people that could be diagnosed with cannabis use disorder no longer met the criteria.

“I’ve been a physician for almost 40 years and I’ve never admitted a patient for complications from cannabis use,” Abrams said. “The number of patients we see with problems with use of alcohol, heroin, and methamphetamine is enormous. [Sessions’] statement is unfortunate and uninformed.” 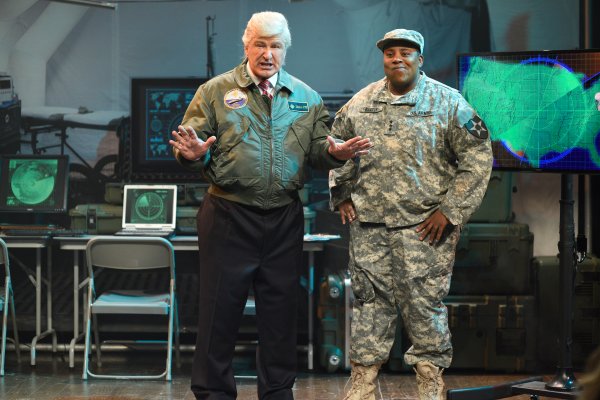 Saturday Night Live Will Actually Be Live, Everywhere
Next Up: Editor's Pick