See a Rare Outtake from a Charles Manson Jailhouse Interview

It was a mass-murder case that helped redefine the American obsession with “true crime” stories: the saga of Charles Manson, who is currently serving a life sentence for ordering members of his cult-like following, nicknamed the “Family,” to murder at least seven people — including actress Sharon Tate, who was more than eight months pregnant — over two consecutive nights in the summer of 1969.

A new ABC New documentary that airs Friday evening — Truth and Lies: The Family Manson — features outtakes from a television interview he did from prison, which Diane Sawyer conducted in 1994. In the more than 20 years since, he has not done another network-television interview. An exclusive clip provided to TIME includes a never-before-seen outtake from that interview — in which Manson reflects on feeling more comfortable behind bars than outside — and sheds light on his feelings about being released on parole on Mar. 21, 1967, after serving seven years for prostitution-related crimes, prior to the crimes that would make him infamous.

“I never realized people outside are much different from the people inside,” Manson says. “The people inside, if you lie, you get punched. And when I got out, all your children would come to me because they never had anybody tell them the truth.”

The ABC special that resulted from the Sawyer interview showed that Manson was still a “satanic spellbinder,” as TIME’s Richard Zoglin wrote at the time. Though the special “crystallized” a debate going on throughout the early 1990s about the state of network news, when wall-to-wall coverage of true crime stories drew criticism from some TV viewers, it was a major hit for the network.

“We watch to be reassured these people are monsters, not at all like you and me,” he noted. “And to face the fear that in some basic ways they are exactly like you and me.” 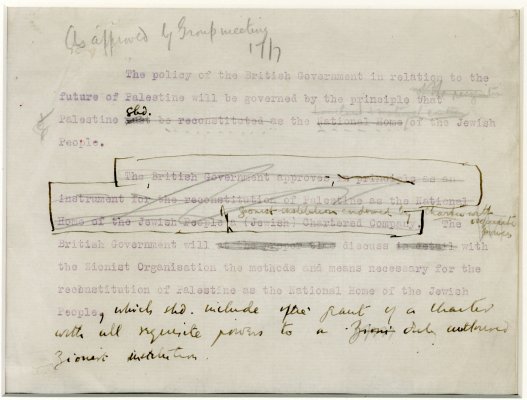 These Two Drafts Show How the Balfour Declaration Evolved
Next Up: Editor's Pick