The creators of the Broadway musical attended Wednesday by Ivanka Trump and Canadian Prime Minister Justin Trudeau said it’s especially important right now to “tell a story about people being welcomed off a plane.”

Trudeau brought Trump to see Come From Away, along with U.S. Ambassador to the United Nations Nikki Haley and about 600 others invited by the Canadian consulate general in New York.

The musical, which opened Sunday, tells the story of more than 6,500 passengers who were stranded for days in Gander, Newfoundland when their planes were diverted following the 9/11 attacks. The musical takes its name from a Newfoundland tradition of referring to people not born on the island as “Come From Aways.”

Canadian husband-and-wife duo David Hein and Irene Sankoff, who were living in New York City on 9/11, began work on the musical years ago. By the time the play premiered in New York, it had taken on new political relevance. The show opened on Broadway this week amid a debate over President Donald Trump’s revised immigration ban, which sought to restrict travel from six majority-Muslim countries and cited the 9/11 attacks as justification.

Broadway shows have already stepped into politics this year. The cast of Hamilton, which tells the story of American immigrant and founding father Alexander Hamilton, addressed then Vice President-elect Mike Pence when he saw the show in November.

“The arts have always been political,” Sankoff said. “We weren’t trying to make any sort of statement with the show. We were trying to report on what happened [in Newfoundland after 9/11] because it was so astonishing.”

Hein noted that the musical opened to a “bipartisan crowd” in Washington, D.C. last year, and he said everyone in the audience still found something to celebrate. “If there’s any political statement, it’s that,” he said. “It’s that we can find common ground and overcome our differences.”

Hein and Sankoff said they were happy to have Ivanka Trump in the audience Wednesday. “Ivanka was the Prime Minister’s guest, and it’s just like the show’s message, we welcome everyone,” Sankoff said.

“The story inspires us constantly, and we hope it inspires every audience member,” Hein said. “I hope it does the same for her.”

Trudeau, who has pledged to welcome 300,000 immigrants to Canada this year, stands in stark contrast to Trump when it comes to immigration policy. Before the performance Wednesday night, Trudeau praised the close relationship between Canada and the U.S. “The world gets to see what it is to lean on each other and be there for each other through the darkest times,” he said, according to the New York Times.

Hein said it was powerful to watch Trudeau on Wednesday meet some of the “Come From Aways” and the Newfoundlanders who helped them in the aftermath of 9/11.

“There’s a feeling right now of helplessness — how do we actually bridge the divide in this country?” said Hein, who has dual citizenship in the U.S. and Canada. “The show doesn’t give a concrete example for each problem, but it suggests that common denominators might be a start.” 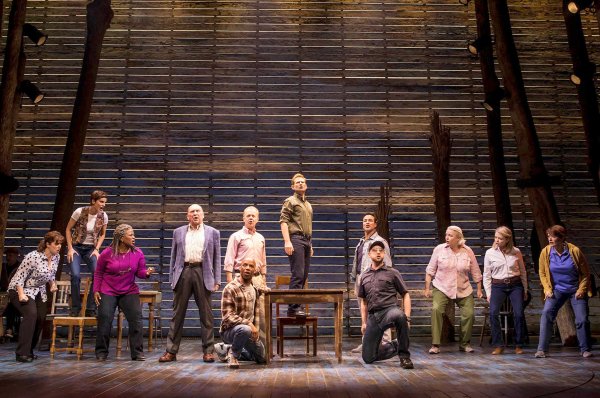 A 9/11 Musical With Heart and Nostalgia
Next Up: Editor's Pick