There was a collective sigh of relief from E.U. supporters this week, when it became clear that incumbent Dutch Prime Minister Mark Rutte had fended off a populist challenge and will almost certainly form the Netherlands’ next government. But, even though Dutch far-right leader Geert Wilders won fewer seats than expected in Wednesday’s parliamentary elections, the threat of far-right populism still looms over Europe.

The Dutch elections were widely seen as a precursor to upcoming elections elsewhere in Europe. Wilders’ loss gave mainstream politicians, battered by the rise of populist movements, a moment of optimism. Commentators suggested that the electoral appetite for populist parties is waning, while German Chancellor Angela Merkel called Rutte’s win a “good day for democracy” and said it signaled a “very pro-European result.”

But Wilders’ loss had more to do with a unique set of local circumstances than with broader European trends. A diplomatic spat with Turkey the weekend before the election — in which Turkish Prime Minister Erdogan called the Dutch “Nazi remnants” after his Foreign Minister Mevlut Cavusoglu was blocked from entering the Netherlands for a political rally — helped Rutte look like a strong leader, Politico reports.

And the 53-year-old Wilders, who is often referred to as the “Dutch Trump,” had his own challenges. He was likely harmed by the U.S. President’s unpopularity in Europe, and shifted his strategy accordingly late in the campaign, to begin pointing out issues with the Trump Administration. “Probably because he noticed [supporting Trump] was hurting him in the polls,” said Pepijn Bergsen, Netherlands analyst for the Economist Intelligence Unit. Wilders also may have been hurt by the political chaos surrounding Brexit. Dutch support for leaving the E.U. went down to 20% following the June 23 Brexit vote.

But voters in the Netherlands didn’t entirely reject the messages of the far-right. In fact, Rutte built momentum in the final weeks of the campaign by adopting some of the movement’s anti-immigration message, telling immigrants to “leave” if they failed to adapt to Dutch culture.

Still, analysts said Wilders’ loss does not mean his ideological allies, like France’s National Front or the Alternative for Germany, will be hindered.

“These elections are mainly about domestic factors,” Bergsen said. “As the saying goes, ‘all politics is local.’”

The next country to hold elections will be France, which has a first round of voting April 23, followed by a May 7 runoff. Far-right leader Marine Le Pen of the National Front is expected to make it to the second round, and Sarah L. de Lange, an expert on radical right-wing parties at the University of Amsterdam, thinks the conditions in France are more conducive for a populist win than in the Netherlands. That’s partly to do with France’s political system, in which the presidential vote ends with two candidates going head-to-head, unlike the Netherlands’ proportional representation system, which requires coalition-building. Le Pen has yet to respond to Wilders’ loss, but National Front secretary general Nicolas Bay has given it a positive spin. “It’s a real success,” Bay told France Inter radio, noting that Wilders captured three more seats in parliament this year. Bay called the gains a “partial victory, even if not the final victory.” 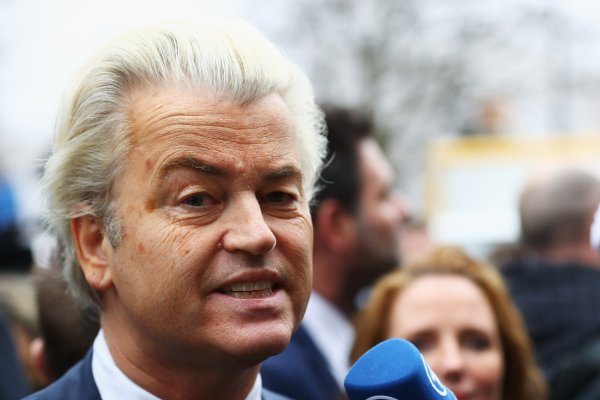