President Trump’s budget for 2018 would slash funding on everything from Big Bird to foreign aid, while boosting support for the Pentagon and the construction of a border wall, the White House said Wednesday.

Trump released his first “budget blueprint” Thursday morning, providing the clearest glimpse yet at his Administration’s war on the so-called “administrative state.” The document reallocates more than $54 billion from government entities like the Environmental Protection Agency, the State Department and even NASA to boost defense spending by the same amount.

Trump’s budget is already facing stiff criticism on Capitol Hill, where his desire to target foreign aid and to defund some clean water programs is drawing opposition from even some Republicans. Presidential budgets are never adopted without significant change, and are often ignored altogether by congressional budgeters and appropriators. But they are still an important signpost in communicating a president’s priorities, both to the American people and lawmakers on Capitol Hill.

Trump, who invested little in formulating specific policy proposals during the presidential campaign, left his team scrambling after he won the election to prepare to implement on his campaign promises. OMB Director Mick Mulvaney told reporters that Trump’s speeches and even news coverage filled in the gaps.

“This is the America First budget,” Mulvaney said Wednesday, referencing a regular Trump campaign slogan that was borrowed from the pre-World War II protectionist isolationist movement. “In fact, we wrote it using the president’s own words. We went through his speeches, we went through the articles that have been written about his policies, we talked to him and we wanted to know what his policies were, and we turned those policies into numbers.”

Mulvaney repeatedly said he couldn’t provide specifics on the cuts to agencies because he didn’t have the numbers in front of him. The full blueprint was released by the White House at 7 a.m. Thursday

It was not immediately clear what programs would benefit from the defense funding boost. Mulvaney told reporters that he had Secretary of Defense Jim Mattis’ assurance that the funding would be spent wisely, but did not elaborate.

“There is no question this is a hard power budget,” Mulvaney said. “It’s not a soft power budget.”

The investment in military hardware in Trump’s budget would come at an expense of foreign aid and democracy promotion programs that have been a hallmark of U.S. foreign policy for decades. It reflects Trump’s attempt to reshape how the nation engages allies and adversaries around the world, with a focus on military might over diplomatic and humanitarian gestures.

The defense sum does include $2.6 billion to be used for the construction of Trump’s wall along the southern border with Mexico. “It’s coming out of the treasury,” Mulvaney clarified, before reporters could even ask whether Mexico would pay for it, as Trump frequently promised. (The White House maintains that Mexico will ultimately pay for it, by a tax on remittances. a dedicated tax on imports or some other trade mechanism. The Mexican government has been outspoken in its opposition to any such plan.)

The Trump Administration Thursday is also releasing its plans for the current fiscal year 2017, which runs through September 30, including a call for an additional $30 billion in funding for defense and the border, Mulvaney said.

Trump’s budget would defund the Corporation for Public Broadcasting, which funds PBS and NPR, and received $445m from taxpayers in fiscal year 2016. Mulvaney said the non-profit corporation would receive some federal funds under the budget, but only because some funding will be needed to unwind CPB.

“The policy is that we’re ending federal involvement with the Corporation of Public Broadcasting,” he said.

The budget “blueprint” only includes only includes top-line proposals for agency spending, with a fuller accounting expected when the complete budget is ready in May, Mulvaney said.

Trump’s Administration is working to dramatically roll back the regulatory state, as well as a host of grant programs that either don’t jibe with Trump’s policy positions or that the White House believes to be unnecessary. Trump has been outspoken in criticizing the Environmental Protection Agency, and his EPA administrator, Scott Pruitt, denied the scientific link between carbon dioxide emissions and global warming.

“You can expect reductions in the EPA that don’t line up with the president’s view on things like global warming and alternative energies,” Mulvaney said. “You will see a reduction in subsidies, a reduction of participation in those types of programs.”

In the case of the Department of Housing and Urban development, Mulvaney continued, “One of the other things the President said was he was going to go after wasteful programs, depleted programs, programs that simply don’t work, and a lot of those are in HUD.” 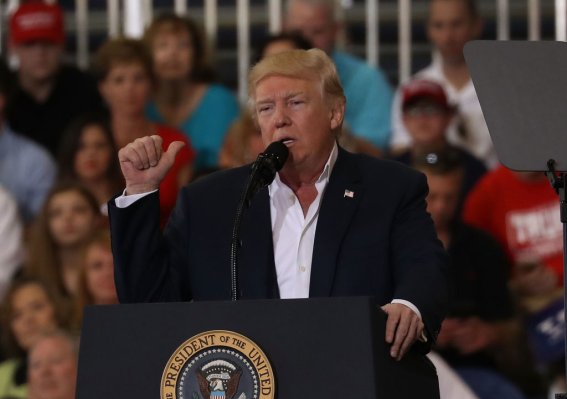