Why All Bathrooms Should Be Gender-Neutral

The day Donald Trump rescinded protections that allowed trans students to use the bathroom of their choosing was like any other day for me. I went to work in a fairly typical outfit: cowboy boots, dangly earrings, bright red lipstick, and a touch of five o’clock shadow. After I’d had my morning coffee, I needed to do what all humans feel called to do in the morning.

I needed to use the bathroom.

Walking down the hallway in my office, I was confronted with the same choice that I face every day: should I use the women’s restroom or the men’s? Technically, as per a trans-inclusive policy at my office, I’m allowed to use whichever bathroom I prefer. But in this case, which bathroom makes more sense? The lipstick suggests that I should use the women’s restroom, but the five o’clock shadow suggests otherwise.

As a gender nonconforming person and a member of the trans community, I find that I’m constantly stuck between a rock and a hard place, or in this case, between a stall and a urinal. If I choose the women’s restroom, I risk facing panicked women who take one look at my facial hair and assume that I’m a predator. If I choose the men’s restroom, I risk facing transphobic men who, with one glance at my dangling earrings, begin hurling slurs or throwing punches.

Trans people and our allies across the country have taken up the rallying cry #ProtectTransKids in order to shame Donald Trump for rescinding Obama-era protections that provided all trans students with “restroom choice.”

But what national LGBTQ organizers and social media personalities alike seem to be missing is that the Obama-era protections for trans kids weren’t good enough to begin with. Allowing trans students to “use the restroom that feels most comfortable to them” assumes that a comfortable option exists in the first place.

For most trans people, particularly young trans people who are still understanding their identity, no gendered restroom is comfortable. That is why we must begin a national conversation about gender-neutral restrooms.

It’s not as radical of an idea as you might think. Throughout my entire senior year at Duke University, I lived on a floor with completely co-ed bathrooms. When the bathroom got busy, I showered and peed one stall over from women and men and trans people alike. For the cis students on my hall, the co-ed bathroom wasn’t a big deal. But for the trans students, myself included, it was a revelation. I finally felt safe when I needed to tinkle.

More recently, I went to a restaurant that had no gendered bathrooms whatsoever. Instead, there was an open, communal area with seven or eight sinks, flanked on either side by a dozen individually locking bathroom stalls with floor-to-ceiling doors. It was totally comfortable, completely gender-neutral and, most importantly, provided plenty of privacy in which to do your business.

If we truly seek to #ProtectTransKids, this is the type of model that must be implemented in schools, government buildings, restaurants, and recreational facilities across the country. It gives everyone enough privacy, and provides trans people with life-affirming safety.

By maintaining gender-segregated restrooms, schools across the country are condoning violence and marginalization against trans young people. Implementing gender-neutral, sufficiently private restrooms in schools is the only way to ensure that trans students are provided an education that is free of harassment and state-sanctioned discrimination. But more than that, it is the only way that we will ever attain true gender equality in our communities. 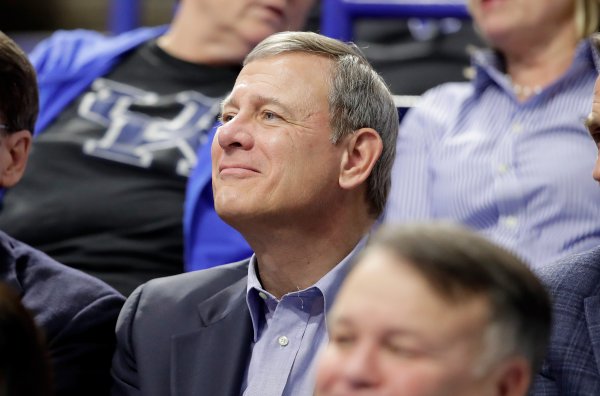 Chief Justice John Roberts Should Speak Out Against Trump's Judiciary Attacks
Next Up: Editor's Pick