Winter Storm Stella Brings Thundersnow to the Northeast. What Exactly Is It?

While New York City’s blizzard warning has been cancelled — and its snow forecast downgraded to 4 to 6 inches — some observant New Yorkers observed the rare phenomenon of thundersnow on Tuesday.

It’s possible more regions in the Northeast will hear thundersnow before Winter Storm Stella ends. The National Weather Service’s Storm Prediction Center said that “a few localized instances of thundersnow cannot be ruled out” as snowfall continues to expand across New England, Pennsylvania and parts of New Jersey and New York.

What is it, exactly? When lightning occurs within snowstorms, it’s called thundersnow. According to the National Severe Storms Laboratory, “Thundersnow can be found where there is relatively strong instability and abundant moisture above the surface, such as above a warm front.”

Thunderstorms are formed because of rapidly falling temperatures vertically in the atmosphere, but the air is more stable during the winter than during the summer, according to the National Severe Storms Laboratory. That makes winter thunderstorms — and by extension, thundersnow — more rare. 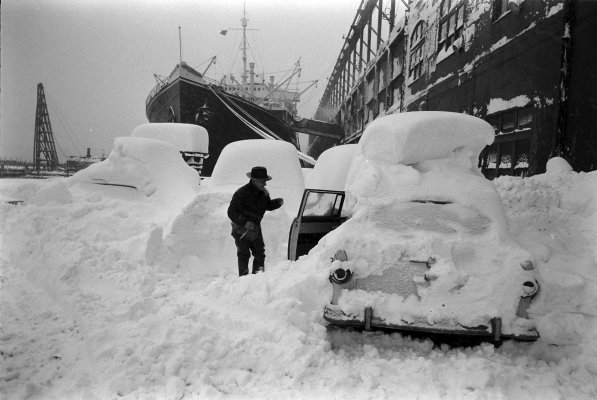 A March Blizzard in New York City: See the Snowy Streets of 1956
Next Up: Editor's Pick