President Trump Made 3 Big Promises on Health Care. The Budget Office Just Undercut All of Them

The Congressional Budget Office on Monday released its financial assessment of the American Health Care Act, Congressional Republican’s alternative for Obamacare, estimating that it would increase the number of uninsured to 24 million by 2026 and reduce the federal deficit by $337 million.

But the estimate also means that, if the bill becomes policy and the CBO’s conjectures are accurate, President Trump, who has voiced his support for it, will be breaking several promises he made to the American people about health care.

Here’s what he’s promised — and how the CBO says the new plan will not deliver on them.

Trump told the Washington Post in an interview shortly before his inauguration that he was aiming to replace President Obama’s Affordable Care Act with a plan that would try and provide universal insurance, although he did not give specific details. “There was a philosophy in some circles that if you can’t pay for it, you don’t get it. That’s not going to happen with us,” Trump told the Post. “We’re going to have insurance for everybody.”

Over a year earlier, in September 2015, he had told Scott Pelley on 60 Minutes, “I am going to take care of everybody. I don’t care if it costs me votes or not. Everybody’s going to be taken care of much better than they’re taken care of now.”

The Congressional Budget Office begs to differ. By 2018, the CBO estimates that 14 million additional people would be uninsured, a number that would rise to 21 million in 2020 and 24 million in 2026.

“In 2026, an estimated 52 million people would be uninsured, compared with 28 million who would lack insurance that year under current law,” the CBO wrote in its assessment.

In September 2015, Trump lamented about the increase in premiums under Obamacare in an interview on 60 Minutes, using them as a reason to justify repealing the law. “Obamacare is a disaster if you look at what’s going on with premiums where they’re up 45, 50, 55 percent,” he told Scott Pelley.

Appearing on the show again after he was elected, in November of 2016, he said his version of health care would not only be superior to Obamacare in substance, but in cost. “It’ll be great health care for much less money. So it’ll be better health care, much better, for less money. Not a bad combination.”

But, according to the CBO, average premiums would initially increase by 15 to 20% in 2018 and 2019 under the American Health Care Act. The costs would start to recede in 2020, and would ultimately decrease 10% by 2026, but the CBO estimates that they would continue to rise for the elderly and decrease for the young, because insurers would be allowed to charge the former up to 5 times as much as they can under Obamacare.

Overall, the CBO says, higher premiums would also be a reason some people decline insurance entirely.

Trump prided himself as an unconventional candidate for the Republican Party, a term that extended to his policy proposals. On May 7, 2015, before he even officially announced his candidacy, he tweeted, “I was the first & only potential GOP candidate to state there will be no cuts to Social Security, Medicare & Medicaid. Huckabee copied me.”

But under the American Health Care plan, federal spending for Medicaid would be reduced by $880 million. A huge reason the number of uninsured would climb is because of the cuts to Medicaid.

As the CBO explains: “The reductions in insurance coverage between 2018 and 2026 would stem in large part from changes in Medicaid enrollment—because some states would discontinue their expansion of eligibility, some states that would have expanded eligibility in the future would choose not to do so, and per-enrollee spending in the program would be capped.”

Although the CBO estimates that Medicare spending would increase under the American Health Care Act, the AARP has written a letter to Congress arguing that the bill would “weaken Medicare’s fiscal sustainability.” 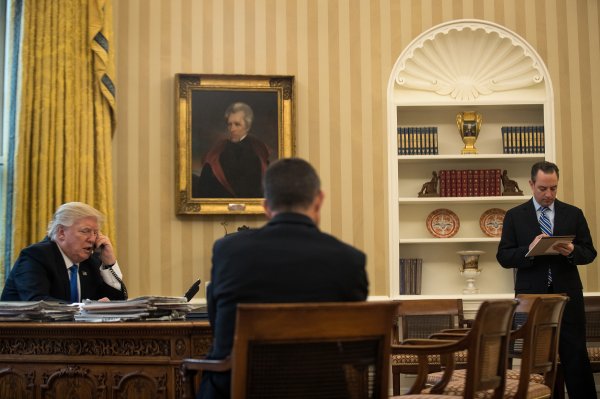