Watch Live: Buzz Aldrin Talks About How to Live on Mars

In a featured session at SXSW on Tuesday, Buzz Aldrin will take the stage for a conversation with Jeffrey Kluger, TIME editor-at-large and co-author of Apollo 13, to discuss his plans for creating a permanent human settlement on Mars, why he chose virtual reality as a medium to educate audiences, and the importance of capturing his hologram and legacy for future generations. Readers can watch the livestream above starting at 4:30 p.m. E.T.

Buzz Aldrin was a Martian long before The Martian. Ever since becoming the second man to set foot on the lunar surface in 1969, Aldrin has been thinking hard about how humanity could get to the Red Planet. He is now unveiling his plan in a virtual reality experience at the South by Southwest festival in Austin.

Aldrin’s VR journey was produced by Los Angeles-based 8i, and beginning on March 17, TIME and LIFE VR will distribute it across multiple VR platforms, including Steam and Viveport for the HTC Vive, and to Oculus Rift soon thereafter. No matter how you view it, Aldrin’s plan is equal parts smart and audacious.

America has been making its shambolic way to Mars for decades now. At the time of the first moon landing, the prediction was that we could reach the Red Planet as early as 1980. Many years — and many postponements — later, the best prediction is sometime in the 2030s.

No matter when NASA hopes to go, Aldrin turns thumbs down on most of the plans it has floated. The problem is, they’re largely built around the “flags and footprints” model: send a crew Mars-ward, put them down on the surface, let them do some science, then bring them home.

Yes, any Mars crew would have to remain on the Red Planet far longer than the three-day endurance record achieved by the Apollo 17 crew in 1972. Given the distances involved and the relative alignments of Mars and Earth, the shortest Mars stay most planners envision would be 30 days. The longest one would be a year. Still, all of them would essentially be freestanding camping trips, with no real infrastructure left behind to make subsequent visits easier, more frequent and even routine.

Aldrin’s solution to that problem is a plan he calls Cycling Pathways to Mars, and it begins on his old homestead, the moon. One of the biggest challenges facing any rocket leaving Earth is the problem of mass. Fuel weighs a lot, as do the tanks of oxygen and water that are needed when astronaut are aboard. All of that has to be muscled off of the ground and out of the powerful, one-g gravity well of Earth.

The moon, however, has only one-sixth the gravity of Earth, and one thing it also has is water ice, a lot of it, dusted through the lunar topsoil and preserved in vast deposits in permanently shadowed craters at the poles. Break water molecules down into their constituent oxygen and hydrogen and you have both rocket fuel and breathable air. The water itself can be used in the astronauts’ diet, in onboard greenhouses and as a coolant for equipment. All of this harvesting and processing could be done by astronauts at permanent moon bases, and the supplies could then be flown into lunar orbit at a fraction of the weight and cost. Crewed vehicles bound for Mars could intercept the cargo there.

The spacecraft the crews would fly on their outward bound and return journeys would be nothing like what’s currently envisioned, either. Nearly all of the existing plans call for a crew module that would be somewhat bigger than the old Apollos, attached to a habitation module about the size of a school bus.

A crew module would still be used in Aldrin’s plan, but he envisions flying it up to rendezvous with a semi-permanent Mars-Earth cycler — an idea that The Martian relied on, too. Launched on a repeating loop from Earth, around Mars, back around Earth and on and on, it would serve as a central, flying hub with power, food, living facilities and more.

Crews leaving Earth could fly out to the moon, pick up cargo launched up to lunar orbit, and rendezvous with the cycler as it swung by on one of its round-trip loops. When they got to Mars, they could undock and land and an existing crew on the Martian surface could lift off and hitch a ride home. The cycler could also ferry out heavy cargo like Mars-surface habitats and solar panels. Forget flags and footprints, the cycler would allow the slow, steady growth of a thriving human colony — even a small city — plus a smaller supporting colony on the moon.

None of this exists yet — at least not in the physical world. But it all exists in the the vivid virtual reality world. And Virtual worlds can fast become real ones. Aldrin, who helped lead the way on one journey long ago, has provided a road map to another. 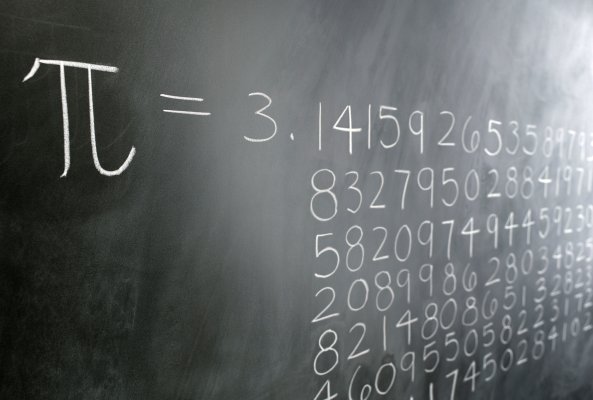 Find Your Birthday Hidden in Pi
Next Up: Editor's Pick