As Jon Snow delivers a new line of dialogue from Game of Thrones‘ seventh season in the final seconds of the first official teaser, an ominous closing sequence plays out.

“There is only one war that matters. The Great War,” he says as the camera pans out from the ruins of Westeros’ major house sigils to reveal the signature blue eye of a White Walker. “And it is here.”

Seeming to foreshadow the coming battle between the Others and the living, the crumbled remains of the sigils form a spiral reminiscent of the pattern White Walkers are known to arrange dead bodies in after a kill—seen in both the series premiere and the third episode of season three.

It is also later revealed to be the shape in which the rocks around the giant Weirwood tree where the Children of the Forest created the Night’s King are arranged.

During a May interview with IGN, showrunner David Benioff elaborated on the recurring pattern. “The first time we saw that was one of the very first scenes in the pilot, when Will the ranger sees the Wildling body parts in an odd pattern displayed by the White Walkers,” he said. “We see it again north of the Wall with the dead horses displayed in a spiral pattern, and then you see it again here and see where these patterns come from — they’re ancient symbols of the Children of the Forest used in their rituals, and the Children of the Forest created the White Walkers.”

We don’t know yet if the destruction of the sigil means that the Great War ultimately cannot be won, or merely that the wall is about to come crashing down. But with this knowledge, seeing Westeros’ wheel of power reduced to this symbol is even more foreboding. 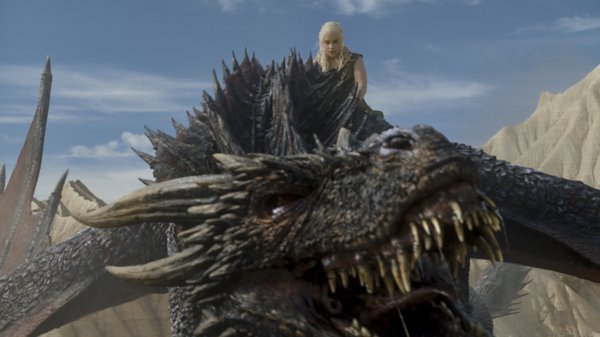 This Clue From the New Game of Thrones Teaser Could Spell Doom for Daenerys
Next Up: Editor's Pick