House Conservatives Are Warming Up to the Obamacare Replacement

Conservative Republicans are warming up to the replacement to Obamacare, brightening the law’s prospects of passing the House of Representatives.

On Friday, two key conservative leaders in the House said they were willing to accept controversial measures in the bill, including maintaining the Medicaid expansion and giving tax credits to lower-income insurance buyers — as long as Republican leadership and the White House would accept some changes in the law.

Their comments reflect a turning point. Earlier this week, conservatives were ridiculing the Republican bill.

“In good faith negotiations you have to look at different tactics to accomplish the same thing,” said Rep. Mark Meadows of North Carolina, the leader of the conservative Freedom Caucus. “The message I’m getting from the White House is negotiations are still open and they are open to making this bill better.”

Both those measures are anathema to conservatives, who threatened to derail the bill for including new entitlements. “That dog doesn’t hunt,” said Meadows two weeks ago.

But with the Republican replacement already passed through two committees this week —Ways and Means and the Energy and Commerce Committees — resistance to the bill is softening.

“What may have been a strident position weeks ago — I was just on the House floor with a number of my colleagues, discussing how do we take the tax credits issue and make it a nonissue,” said Meadows.

Conservatives are now talking about negotiating the particulars of the bill, rather than opposing it outright.

Rep. Mark Walker, the head of the influential Republican Study Committee, said that he would be willing to support tax credits to low-income earners as long as there were changes to the current Medicaid plan. He said that instead of freezing the Medicaid expansion in 2020, as House leadership has proposed, they would want to see it freeze at the end of 2018.

Walker added that if he were to support tax credits, he also wanted to see work incentives for Americans receiving Medicaid benefits.

“If we got swept or shut out on those things, it would be hard for us to get there,” Walker added.

Opposition towards the Republican replacement is also softening among conservative grassroots groups.

Conservatives had previously opposed tooth-and-nail the new tax credits, which are viewed as a costly government entitlement and merely a replacement of the much-maligned Obamacare subsidies, which provide federal assistance to low-income families to pay insurance premiums.

But a top official at a leading conservative group suggested in an interview that there may be room to negotiate on the tax credits. Specifically, conservatives want to see a repeal of the Obamacare regulations on insurance markets.

“We don’t love the refundable credits, but they look a whole lot better to me if you get rid of the regulatory scheme in the insurance markets,” said the official, who declined to speak on the record as the group settles its position. “It’s the regulations that are going to be pushing prices up.”

Rep. David Brat, a member of the Freedom Caucus who has opposed the Republican leadership bill, said Friday he wanted to know what kind of insurance regulations could be repealed before passing the current bill.

“It’s the cart before the horse. We need to know what the insurance regs are going to look like,” he said. “If you don’t know what the regs look like, how do you structure the rest of the healthcare plan around that when that’s the key cost driver.”

The problem is that because the Republican replacement to Obamacare is being passed through a limited process known as reconciliation, regulatory changes cannot be made part of this bill.

Instead, the regulatory changes would either have to be part of a subsequent bill, or administrative changes made by the executive branch, or by a more controversial process: overruling Senate rules to allow regulatory changes to be made.

“It is unfortunate that we’re being constrained by a Senate rule,” said House Majority Leader Kevin McCarthy at a press conference Friday morning.

The tax credits in the Republican bill would lead to an average 36% reduction in federal assistance to low-income earners buying insurance compared with Obamacare, according to the Kaiser Family Foundation. The Republican bill limits tax credits to $4,000 for older individuals, and $2,000 for younger.

Outside Washington, however, even Republicans are concerned about the new bill’s tax credits being too small.

“Obamacare pretty much covered everything. It’s really good for us,” said Phyllis Mutters, a lifelong Republican who voted for Trump.

Mutters lives in rural North Carolina, in Rep. Patrick McHenry’s congressional district, and pays $179 in healthcare premiums through Obamacare to take care of a special needs daughter and for medication after a brain tumor caused her to have a stroke.

“If they do repeal the subsidies, we will not be able to afford insurance,” Mutters said. 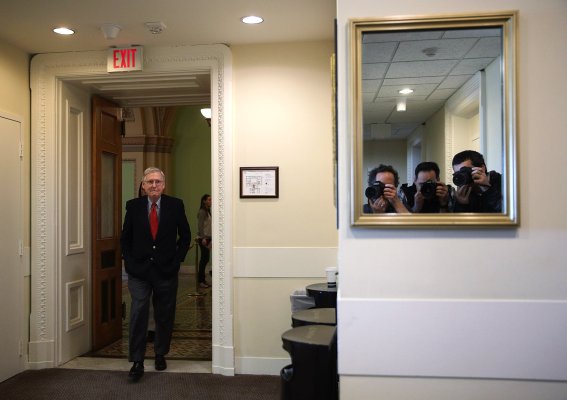