A first-term congressman who previously worked as a doctor is facing criticism after saying poor people “just don’t want health care and aren’t going to take care of themselves.”

Rep. Roger Marshall, a Republican from Kansas, has quickly become part of a group of doctors taking a lead on replacing the Affordable Care Act. The House Republicans released their health care plan on Monday to intense criticism from both liberals and conservatives, with some estimates predicting as many as one in six people could lose health insurance under the GOP plan.

So when Marshall made his comments to STAT, a health care-focused website, many saw them as insensitive and out of touch. The remarks came in an interview last week when Marshall was talking about Medicaid, which expanded to more than 30 states under Obamacare, including Republican states.

The Congressman told the publication he does not believe Medicaid has helped people. “Just like Jesus said, ‘The poor will always be with us,’” Marshall said in the interview. “There is a group of people that just don’t want health care and aren’t going to take care of themselves.”

Medicaid advocates struck back. “These are people who are out there, working hard, paying their bills, and to have their elected member of Congress pointing their finger at them I’m sure is disappointing,” David Jordan, executive director of the Alliance for a Healthy Kansas, told the Kansas City Star.

In defending himself, Marshall said he was trying to explain that creating a national health care policy focused on “one segment of the population” does not work because of various peoples’ needs, according to the Washington Post. “When I said, ‘the poor will always be with us,’ it was actually in the context of supporting the obligation we have to always take care of people, but we cannot completely craft a larger, affordable health-care policy around a comparatively small segment of the population who will get care no matter what,” Marshall said in a statement. 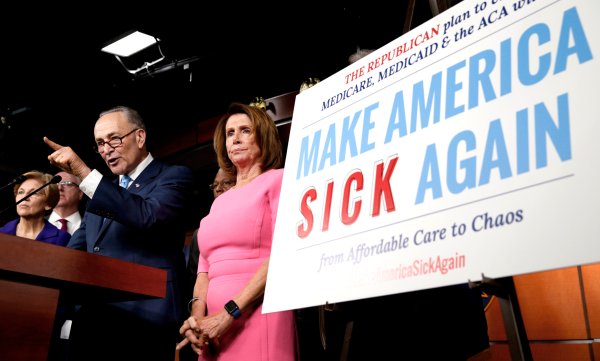 How Republicans and Democrats Can Both Keep Their Promises on Health Care
Next Up: Editor's Pick