She may be one of the biggest names in Hollywood, but Anne Hathaway‘s No. 1 fan has a special connection to the star.

On Thursday, the actress shared an Instagram snap of her 11-month-old son Jonathan Rosebanks watching his mom’s Wednesday speech at the United Nations on International Women’s Day, which addressed the importance of paid parental leave.

“JRS watching Mommy give her speech at the UN yesterday,” Hathaway, 34, captioned the photo of her little boy, who was outfitted in lion-print duds and balancing himself while tuning in intently on a tablet.

In her speech, Hathaway touched on the United States’ Family and Medical Leave Act, which allots new parents 12 weeks of unpaid maternity leave, pointing out the unfairness of being expected to go without pay for a long period of time.

“Somehow, we and every American parent were expected to be back to normal in under three months without income,” she said.

The actress, who was named goodwill ambassador for the United Nations, also encouraged listeners to be more inclusive of the at-home roles — specifically, being more open to offering fathers the same parenting opportunities as mothers.

“[We need to] redefine and destigmatize men’s roles as caregivers,” Hathaway said. “In other words, in order to liberate women, we need to liberate men … Why do we continue to undervalue fathers and overburden mothers?”

“America is the only high-income country that does not have paid maternity leave,”Hathaway told Motto about her decision to become a UN Ambassador on the subject. “One in four American mothers has to return to work two weeks after they give birth because they are economically unable to stay at home. It just broke my heart.”

Added the Ocean’s Eight star, “And the fact that [leave is] only offered to women means that a lot of women don’t take it because they think it will derail them on their career track. And the fact is — unfairly — it often does. It’s a motherhood penalty. 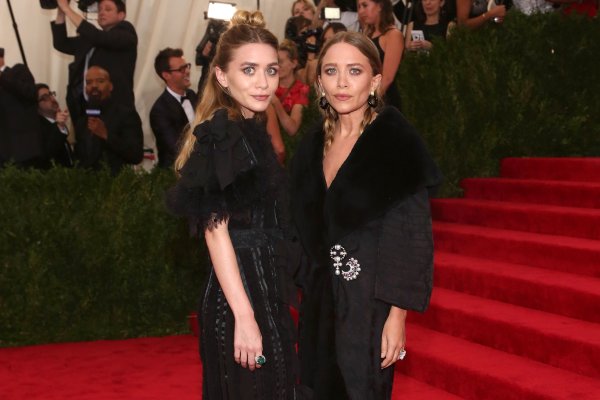 Mary-Kate Olsen Opens Up About Her Life With Husband Olivier Sarkozy
Next Up: Editor's Pick