US President Donald Trump arrives in West Palm Beach, Florida, on March 3, 2017.
Nicholas Kamm—AFP/Getty Images
Ideas
By Michael Ashcroft
Lord Ashcroft is a businessman, philanthropist and pollster who served as deputy chairman of the Conservative Party in the United Kingdom from 2005–2010.

One day, President Donald Trump speaks in a presidential tone at an address to Congress; four days later, he launches a pre-dawn Twitter blitz to accuse his predecessor of bugging his New York base during the election campaign, with no apparent evidence.

If you are feeling discombobulated by the new order, help is at hand. Over the last six months, I have polled some forty thousand Americans and spoken to voters across the country for my Ashcroft in America research. The findings give us some clues as to what is happening and what to look out for.

Things might seem shambolic, but the White House is sticking to its strategy. Trump’s election campaign may have looked ill-disciplined, but his message was consistent: Things need to change, and I’m the man to change them. The same is true of his Administration. His moves to begin dismantling Obamacare, withdrawing from the Trans-Pacific Partnership, and the executive orders enacting a travel ban for six largely Muslim countries and initiating work on a southern border wall — all wildly controversial — show that they understand their voters’ priorities on jobs, healthcare, immigration and national security. And if the President seems determined not to behave like a normal politician, that’s all part of the plan. In fact, it’s what he was elected to do.

Trump voters are happy (for now). Listening to some of the commentary, you would think the world was coming to an end. But as my post-election research has shown, the voters who put Trump in the White House think he’s doing a great job in the face of furious criticism — which helps to boost their already high expectations of what he will do in the next four years. And many Trump voters pay little attention to politics most of the time: they care about the direction of travel, but only his opponents take part in the daily outrage.

The President’s opponents are helping him by picking the wrong fights. Examples abound: the media rumpus over Trump’s refusal to take a question from CNN during a January press conference, the fuss over potential conflicts of interest in his business affairs, complaints about the ethnic and gender balance of his cabinet nominees (and their wealth), the street demonstrations on inauguration weekend that seemed to be protesting the election result itself, New York thespians’ hectoring of popular Vice President Mike Pence during an evening at the theater or the ritual denunciations from Hollywood. As far as the President’s voters are concerned, the right people are complaining (so he must be doing something right), and their grievances have nothing to do with real-world problems (which Trump, alone in the political realm, seems to understand).

In the “fake news” war, there can be only one winner. The media will continue to accuse the President and his team of uttering falsehoods. He will say they publish fake news. None of it will make any difference. If voters thought his erratic relationship with facts was a deal breaker, Trump wouldn’t have won in the first place. In a confrontation between the President and the established media, his supporters will side with the President or neither — indeed, my polling found that they would be more likely to believe Trump than the CIA.

For Democrats, things could get worse before they get better. Losing parties have to learn the lessons from defeat before they can start winning again. But my polling found that Democrats blame the election result on the voters, for not understanding the issues; the media, for spreading “fake news” and not holding Trump to account; and the Russians, for hacking Democrat HQ. Few blame their own campaign (or candidate). The party’s future direction will probably be set by its most active and committed supporters, who also happen to be the most liberal and progressive — as different as you could imagine, in other words, from the Trump voters they need to win back.

If it’s Trump vs. Congress, the President’s voters will be rooting for him. Republicans in my poll thought more highly of Donald Trump than they did of the GOP as whole — let alone Congressional Republicans, whom they saw as part of the reviled Washington establishment. As far as the voters are concerned, America now has a one-party government with no excuse not to get things done. But if it comes to a conflict, they see Trump as the man with their interests at heart.

By 2020, there has to be change. Trump voters think the President is on their side and speaks their language. But above all, they expect him to make things happen. While some are enjoying the show, many see the apparent chaos as the cost of doing business. “Because he’s in office, that’s what you’re going to get,” one voter told us last month. “Do I want that? No. Do I want the change? Yes.” They have high hopes that he will achieve something tangible — for them.

Trump has some tough circles to square. The President has his work cut out. Most of his voters want to see the end of Obamacare, but not until another scheme is ready to take its place — one which costs less but still covers pre-existing conditions. More broadly, he has to please different parts of his voting coalition that disagree about things like family values, the size of government and U.S. military intervention overseas. Delivering for all of them will be a real test of the dealmaker they believe they have elected.

Lord Ashcroft is a businessman, philanthropist, author and pollster. His book Hopes And Fears: Trump, Clinton, The Voters And The Future is available from BitebackPublishing.com. His research is published at LordAshcroftPolls.com. His Twitter handle is @LordAshcroft. 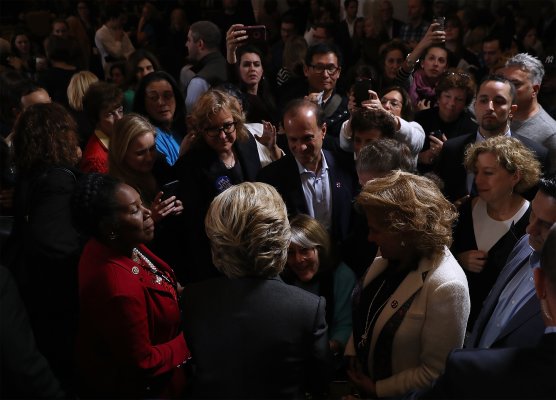 The Left Is Killing Itself With Pessimism
Next Up: Editor's Pick