There May Already Be a 'Trump Effect' at the Southern Border

New data from the Department of Homeland Security shows President Trump’s recent executive actions on immigration may have led to fewer crossings at the U.S. border with Mexico.

In January, over 31,000 people were apprehended at the southern border, U.S. Customs and Border Protection says, but by February apprehensions fell by 40% to 18,762 people. Homeland Security Secretary John Kelly said in a statement issued Wednesday that the data showed an “unprecedented decline in traffic,” during a period when CBP typically experiences a slight increase in apprehensions.

“The drop in apprehensions shows a marked change in trends,” Kelly said in a statement. “Since the Administration’s implementation of Executive Orders to enforce immigration laws, apprehensions and inadmissible activity is trending toward the lowest monthly total in at least the last five years.”

Before President Trump was inaugurated, Central American leaders warned that an influx of migrants were seeking to reach the United States before the new Administration took office.

In an interview with Reuters in November, Honduras’ deputy foreign minister Maria Andrea Matamoros said coyotes, or smugglers, had been telling people they had to leave their country before the new President took office. Customs and Border Protection reportedly apprehended 157,000 people between Oct. 1 and Jan. 20, the day of the inauguration, a 35% bump from the year before.

One of the President’s first acts in office was signing a pair of executive orders that significantly increased the enforcement capabilities of immigration and border patrol officers. The new data shows that beyond giving immigration enforcement more discretion during arrests and getting the “bad ones out,” the new policies may be stopping people from coming to the U.S.

Secretary Kelly says that is a good thing. “This trend is encouraging because it means many fewer people are putting themselves and their families at risk of exploitation, assault and injury by human traffickers and the physical dangers of the treacherous journey north,” he said.

It’s yet to be seen if the trend holds. Typically there is another bump in crossings from March until May. 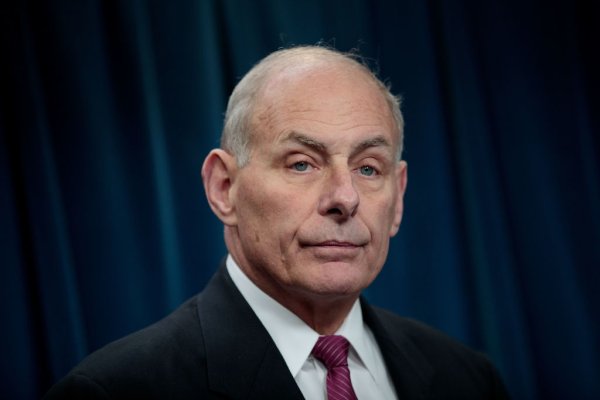