What to Know About Geert Wilders, the 'Dutch Trump'

PVV Candidate, Geert Wilders speaks to the crowd, the media and shakes hands with supporters as he kicks off his election campaign near the Dorpskerk on February 18, 2017 in Spijkenisse, Netherlands.
Dean Mouhtaropoulos—Getty Images
By Tara John

Dutch far-right politician Geert Wilders has spent more than a decade encouraging popular resentment against Muslims, the E.U. and immigrants. What were once fringe views have turned into a national movement, which has many asking whether the March 15 Netherlands elections will turn into another populist revolt against the established liberal order.

Polls currently show Wilders’ anti-immigration Party for Freedom (PVV) running neck and neck with Prime Minister Mark Rutte’s Liberals. With elections in France, Germany and potentially Italy on the horizon, how Wilders fares in Holland will be viewed as a bellwether for the future of the E.U. Here’s what we know about him:

Why is he compared to Donald Trump?

Wilders gained the nickname of the “Dutch Trump” for his ability to court controversy, his effective use of social media, his demonization of immigrants, and his peroxide blonde bouffant hairstyle. Now it seems like he is lagging in the polls due to what is being described as the ‘Trump effect.’ Pollster Peil.nl told Bloomberg that Dutch voters might have been scared off following the “measures taken by President Trump.”

What are his policies?

The 53-year-old relies mainly on familiar talking points of European Islamophobics: bleak warnings about the ‘tsunami’ of Muslim immigration, while calling Islam a “totalitarian ideology.” His party’s one-page election manifesto is focused mainly on anti-Islam measures, which includes the closure of all mosques, the ban of headscarves in public, to “De-islamize the Netherlands” and “zero asylum seekers and no immigrants anymore from Islamic countries.”

He was put on trial in 2010 for inciting hatred against Muslims, a charge of which he was acquitted. However in Dec. 2016, Wilders was found guilty for the same charge after he led an anti-Moroccan chant at a political event— which led to him surging in the polls.

Wilders is also virulently anti-E.U. After U.K.’s 2016 vote to leave the union, he called for a Dutch referendum on membership to the bloc. He likes to describe the “archetypal” yet imaginary Dutch couple “Henk and Ingrid,” who have suffered at the hands of a tyrannical E.U. and out-of-touch political elite.

Where is he from?

He was born to a middle-class family in the small Roman Catholic town of Venlo, on the eastern edge of the country. His father worked at a printing company and his mother was half-Indonesian— a side of his family tree that he has distanced himself from.

The youngest of four siblings has a difficult relationship with his older brother Paul, who routinely criticizes the politician on Twitter and has reportedly not spoken to Wilders since he posted a photomontage of Angela Merkel with blood on her hands following an attack on a Christmas market in Berlin last year.

“My brother knows that some of his supporters take his messages literally, and that they use Facebook to call for acts of violence,” Paul Wilders told Der Spiegel. “Geert doesn’t want violence, and yet he accepts the potential consequences of such messages.” His brother also described teenaged Geert as “a horrible pest, egocentric and aggressive.”

Wilders’ aversion to Islam is thought to have been cultivated before university, when he travelled to the Middle East in the early 1980s. There he travelled to Syria, Iran and Egypt. He also spent around a year working on a kibbutz in Israel, a country he has since developed a longstanding affinity for— he is known to be on close terms with current Prime Minister Benjamin Netanyahu.

How did he get into politics?

In 1988, Wilders joined the centre-right Volkspartij voor Vrijheid en Democratie (VVD), where he became a local councillor in Utrecht in 1997 and assistant to its leader, Frits Bolkestein— a politician who opposed multiculturalism, immigration and E.U. integration. During his early days in politics, Politico reports, Wilders took media training classes and began bleaching his wavy brown hair to blonde.

After getting elected into Parliament in 1998, he refused to toe the party line and instead warned parliament about the dangers of Islamic extremism. His exhortations gained traction after the killing of filmmaker Theo van Gogh in 2004, by a Dutch Moroccan upset by a film he had made that was critical of Islam. Wilders, who helped make the film, was immediately placed under police protection— which he has remained under ever since.

He refuses to go out to a restaurant or cinema, and only sees his Hungarian-born wife, Krisztina, no more than twice a week, the New Statesman reports. He also lives in a series of safe houses. It’s a strange existence Wilders has capitalized upon to bolster his central argument that Islam is an ever present danger.

Why is his party likened to a sect?

Because he is its only member. In 2004, he started his own party which was later renamed PVV. Its lawmakers and councillors are seen merely as supporters, and rarely make public statements or appearances — and so Wilders is effectively their only public face. Being a one-man show means he does not receive government subsidies, relying entirely on outside donations, such as New York-based company FOL Inc and the conservative American think-tank, the David Horowitz Freedom Centre.

Will he become Prime Minister?

Probably not. PVV could top the ballot, but Wilder’s chances of becoming Prime Minister are slim. This is because the Netherlands has a proportional voting system, where Parliamentary seats are distributed by the proportion of total votes. Wilders’ party is highly unlikely to gain the majority needed (75 seats) to form a government, and make him Prime Minister. Major parties on the left or the right have vowed to not join him in a coalition.

Despite that, Wilders has had a major impact on the race. The other front-runner, Rutte, published an open letter that echoing Wilders’ anti-immigrant sentiment, advising immigrants to accept Dutch culture “or leave.”

He might not become Prime Minister, but his invective has helped tilt the Netherlands into a more nationalistic direction. 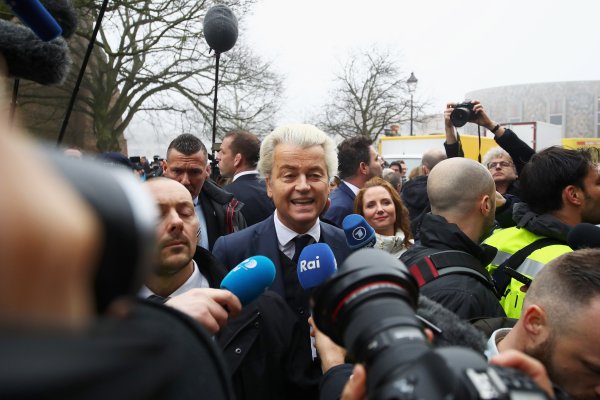 Dutch Populist Wilders Lags in Polls Due to 'Trump Effect'
Next Up: Editor's Pick