When President Trump ordered a ban on immigration from seven predominantly Muslim nations on Jan. 27, ostensibly to defend the U.S. from terrorism, global uproar ensued. Rights advocates, foreign governments and many U.S. citizens denounced a move that seemed to single out those of Muslim faith. On March 6, Trump signed a revised version of that Executive Order, designed to withstand the legal challenges that prompted a federal court to block the implementation of the initial ban. Now only six countries are subject to the ban. Iraqis may travel freely to the U.S. as before.

Trump’s original order was received poorly in Iraq, whose armed forces are engaged in a massive U.S.-backed offensive against the forces of the Islamic State. Iraq’s military is currently fighting alongside some 5,000 U.S. troops in an operation to dislodge ISIS from Mosul, the largest city under the militant group’s control during its advance across Syria and Iraq in 2014.

Under the previous order, at least one Iraqi commander was barred from visiting the U.S. for strategy sessions. Iraqi citizens who risked their lives while working with U.S. military forces as interpreters and contractors since the 2003 invasion were separated from their families. Many regarded it as an insult to a country that had been a loyal partner in the war against terrorism. “We don’t deserve to be banned from going to the U.S.,” Major General Najim al-Jabouri, a senior Iraqi army commander in the Mosul operation, told TIME. “We fought, and are fighting, shoulder to shoulder against ISIS with the Americans.” Jabouri’s office is filled with certificates for military training he completed in the U.S. and photos of him with American officers. Jabouri himself has a U.S. green card and a home in Virginia. His office outside the northern Iraqi town of Makhmour is located steps from the U.S. army base. “We are fighting ISIS here, so that they don’t make it to America,” he said.

The reversal came after a major lobbying effort on U.S. officials by their Iraqi counterparts. On Jan. 28, a day after the signing, a delegation from the Iraqi Foreign Ministry met with Douglas Silliman, the U.S. ambassador in Baghdad. “We told him, ‘Iraq is not a country that exports terrorism to other countries,'” recalls Ahmad Jamal, a spokesman for Iraq’s Foreign Ministry. Iraq’s parliament even voted on Jan. 30 to urge a retaliatory ban on Americans entering the country. Baghdad never carried out the ban, but if it had, it might have created chaos for the international military coalition battling ISIS–especially as military chiefs in the U.S. mull the possibility of increasing troop numbers in Iraq.

Good relations have been restored as the campaign to stamp out ISIS in Iraq is at a pivotal point. After reclaiming large portions of Mosul, Iraq’s military launched a new phase of the operation in February, pushing into the neighborhoods west of the Tigris River. The fight for this western section poses a complicated new challenge, with up to 800,000 civilians trapped in the area as of mid-February, according to the U.N. In the bitter fight ahead, the Iraqis need to be confident their partnership with the U.S. is not on rocky ground.

But Trump’s revised Executive Order may yet destabilize the fight against Islamic extremism elsewhere. It still imposes a 90-day ban on new visas to citizens of Iran, Somalia, Sudan, Yemen, Syria and Libya and also bars refugees from any country from entering the U.S. for a period of 120 days. The rules have been derided, in these six countries and elsewhere in the Arab world, as an act of discrimination against Muslims, roiling relations with key U.S. allies and further straining relations with majority-Muslim nations. The ban strengthens the position of conservatives in Iran who oppose engagement with the U.S., and may complicate U.S.-backed operations against ISIS in Syria, al-Qaeda in Yemen and allied extremist groups in Libya.

“[These countries] are very aware that this White House has a profound anti-Muslim current. The ban was kind of a small symptom of that,” says Paul Salem, an analyst with the Washington-based Middle East Institute. “What they’re asking themselves now is, ‘How will that manifest itself in the future?'”

–With reporting by REBECCA COLLARD/ERBIL 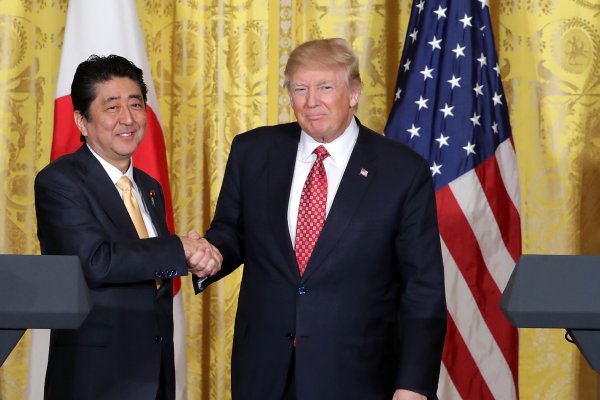 Sorry, Brits: Abe and Trump Have the Real 'Special Relationship'
Next Up: Editor's Pick