‘This Will Be the Worst War’: Fears of Mass Displacement as Thousands Flee Conflict in Myanmar’s Northeast

Residents who fled from conflict areas near the Myanmar and Chinese border gather in Lashio to find transport to their home towns on March 8, 2017.
Nay Myo—AFP/Getty Images
By Feliz Solomon / Lashio

A steady stream of men, women and children arrive by the hundreds at Mansu Monastery in rural northeastern Myanmar. Each day brings a fresh wave of people fleeing a new outbreak of conflict that threatens to derail the country’s already fragile peace process. Powdered with red dust after hours on open-air flatbed trucks through mountain roads, they enter Lashio, the largest city in Myanmar’s Shan state. New arrivals walk into the monastery quarters carrying bundles of belongings and stories of violence from the streets and surrounding suburbs of Laukkai, capital of the Kokang Special Administered Zone bordering China.

Just before dawn on Monday, members of a Kokang-based armed group called the Myanmar National Democratic Alliance Army (MNDAA) attacked a hotel in Laukkai and several outposts of Myanmar police and armed forces, known locally as the Tatmadaw. Government figures estimate that there were at least 30 fatalities, including at least five civilians, and about 20 of the deceased were burned beyond recognition. “I can’t live there anymore, there’s too much shooting,” Than Naing Tun, a 35-year-old sugar-cane farmer, tells TIME as he waits at the monastery to board a truck back to his hometown in Magwe.

Most, if not all, of the displaced people arriving in Lashio — about 100 miles southwest of Laukkai— are migrant workers from Myanmar’s central plains. Attracted by the somewhat higher wages on offer in Kokang, many labor in the fields or work at recycling plants. “Our families found out from watching TV, and all of the phone lines [in Laukkai] were cut,” Than Naing Tun says, “they were so worried, they thought we were dead.” While the migrants try and make their way back to central Myanmar, the Kokang people, who are ethnic Chinese, have mostly fled across the border into Yunnan province in China. Humanitarian agencies and local aid workers estimate that more than 10,000 people have made their way over the border.

Several of those who fled to Lashio tell TIME that almost everyone in Laukkai is attempting to leave, as the sounds of gunfire, and what they believe were mortar shells, have resumed each nightfall since the early hours of Monday morning. Myint Kyi, 44, seated beside her 14-year-old daughter, says she heard gunfire and explosions for several hours before daybreak on Monday. When the sun rose and the sounds died down, she walked to a nearby hotel about 50 m away from her apartment, where the fighting first broke out. There she says she saw four dead bodies — three men and one woman — still lying on the ground outside. She decided to leave with her family. “We left everything behind,” her daughter San San Maw says. “We left so fast we didn’t even bring our slippers.”

But leaving has not been easy for many. Unable to enter the town of Laukkai, convoys of trucks are waiting in nearby towns for the thousands of people trying to head towards Lashio and on into central Myanmar. Meanwhile, bus drivers in the town are charging passengers 10 times the normal fare to leave — about $73 instead of the usual $7.30 — several arrivals tell TIME, consistent with accounts in local media. Myint Kyi says that “almost everyone” wants to leave, but most do not have enough money to pay the exorbitant fare.

This week’s outbreak is the deadliest escalation of conflict in Kokang since early February 2015, when the MNDAA launched an attack on Myanmar forces in an effort to reclaim control of the territory. The group’s presumed leader, Peng Jiasheng, was ousted by the Myanmar government in 2009, forcing him and his supporters to retreat into the remote and forested hills of Yunnan. When they re-emerged, the Tatmadaw fiercely fought off their surprise comeback, imposed a four-month period of martial law and ultimately sent the MNDAA back into hiding.

Monday’s escalation sparked fears of a repeat, and concerns about the humanitarian cost. Myint Kyi, the mother TIME met at the monastery, says the city’s residents worry that “this time will be worse than the last,” which left hundreds of soldiers dead on both sides of the conflict and caused an exodus of tens of thousands of civilians, mostly to China. “I heard that the Tatmadaw will take down all of the MNDAA, they will get them all, and this will be the worst war,” she tells TIME.

The abbot of Mansu Monastery, Padanna Pone Nay Nanda, tells TIME that well over 1,000 migrants have already passed through his compound since Monday. Upon our visit on Wednesday morning local time, hundreds were loading up on trucks and leaving, while more trickled in. Another 300 were expected to arrive throughout the day. The Mansu complex is known far and wide as a refuge, having welcomed displaced populations many times over Padanna’s 28 years as a monk there, and he coordinates with local aid workers to provide for the displaced. “This is only the start, it’s hard to know what will happen over the next week,” he tells TIME, recalling the thousands that transited through during the previous conflict.

Myanmar, which was ruled by a brutal military junta until 2011, has suffered one of the world’s most protracted and complex civil wars, with more than 20 nonstate armed groups fighting the Myanmar army for political autonomy over the course of nearly six decades. The new civilian government, led by Nobel laureate and now State Counselor Aung San Suu Kyi, has pledged to make peace a priority as it struggles to rebuild a nation devastated by conflict, corruption and poverty. In late 2015, a cease-fire was reached between government forces and eight of the rebel armies, though several groups abstained and others were categorically excluded from the process. Among those denied a seat at the table were the MNDAA, along with three other armed groups with which the Kokang have now formed a coalition. The Brotherhood of the Northern Alliance, as it is known since its inception last year, includes the MNDAA, the Arakan Army, the Ta’ang National Liberation Army, and some parts of the Kachin Independence Army.

Suu Kyi released a statement condemning Monday’s attack and called for an immediate cessation of hostilities, warning that continued attacks can bring “nothing but sorrow and suffering on the innocent local tribes and races,” urging actors to join the national peace dialogue. The Tatmadaw, however, has repeatedly stated that it will not allow the concerned groups to participate in the peace process unless they immediately disarm. Having withstood previous cease-fires with the Myanmar army that later disintegrated, their leadership is disinclined to do so. 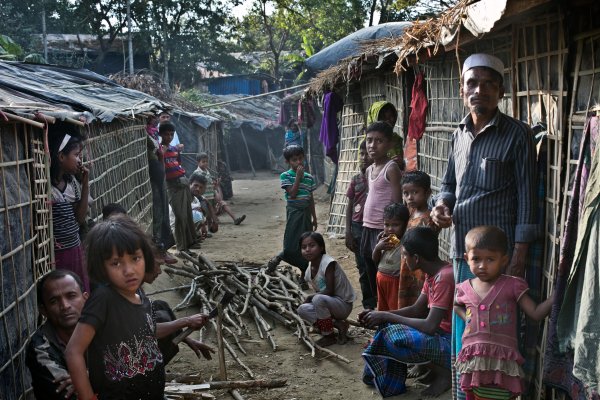