Can North Korea Actually Hit the U.S. With a Nuclear Missile?

North Korea’s stated goal is to develop a nuclear-armed ballistic missile capable of hitting the U.S. mainland. This is not just the whim of Supreme Leader Kim Jong Un — it is, in fact, part of his family legacy. In 2011, Kim Jong Un’s father, former regime leader Kim Jong Il, said his nation’s “nuclear deterrent [was] to protect our sovereignty from the blatant nuclear threat of the United States and its increasingly hostile policy.”

Since taking the reigns, Kim Jong Un has thrown everything at this quest, believing that it guarantees the future of his despotic regime. A fourth nuclear test in early 2016 prompted unprecedented U.N. sanctions, but a fifth test still followed. The brazen Feb. 13 assassination of Kim Jong Nam — Kim Jong Un’s estranged half-brother — at Kuala Lumpur International Airport was bookended by missile tests one day before and three weeks after.

Experts posit that North Korea is four to five years away from developing a nuclear-armed ballistic missile capable of decimating an American city. However, Thae Yong Ho, a former deputy ambassador to London who defected to South Korea late last year, said the secretive regime wants to capitalize on the disruptive election of U.S. President Donald Trump and impeachment of South Korean President Park Geun-hye to realize full nuclear capability at “all costs by the end of 2017.”

Nathan J. Hunt, head of 3D reconstruction at the Strategic Sentinel analysis firm in Washington D.C., has been modeling North Korean missile and nuclear facilities for 16 years. He tells TIME that the four to five year range is “pretty much” accurate. However, he highlights that North Korea has already mastered submarine launch capability and has “canisterised” its Pukkuksong-2 (Polaris-2) ballistic missile ahead of predications. This key development means rockets are kept in mobile environmentally controlled canisters for launch anywhere, any time. “They can erect it, it’s cold launched and then ignites,” Hunt says. “They don’t have to fuel it.”

However, this latest salvo of four rockets launched March 6 — three of which fell into Japan’s Exclusive Economic Zone; a fifth failed — was probably more for propaganda value. They were older generation extended range scud missiles for regional use, and were likely launched as a show of force as the U.S. and South Korea undergo annual military drills, which North Korea views as a rehearsal for invasion. South Korea has also just accepted the first U.S. THAAD anti-missile battery this week much to the ire of Pyongyang and Beijing.

Still, those launches were strategically significant as the first from Sohae Satellite Launching Station — actually from a field nearby — which is generally used for space launches and the static test-firing of missile engines. Sohae launches provide more range to gain altitude over the Korean peninsular and so are better suited for Intercontinental Ballistic Missiles (ICBM). The regime may be getting the world used to missile tests from Sohae as they move forward with actual ICBM tests. “That way when they do a true ICBM test its not going to be that big of a shock,” says Hunt.

An ICBM test is much more sophisticated, involving a multi-stage missile, and would be a major step forward. The impoverished nation of 25 million has already successfully completed two-stage launches but would need to perfect three-stage to develop true ICBM capability.

This is what is ultimately necessary to hit the U.S. mainland (San Francisco is 8,200 km away; New York City is 10,800 km). North Korea would need a missile that can take off, exit the earth’s atmosphere, handle reentry without burning up and deliver a miniaturized nuclear payload to a specific target. That is no mean feet and took Western powers half a century to get pretty much right, though the technology is still by no means perfect.

March’s U.N. sanctions were designed to hamper the regime’s pursuit of that technology by limiting the import of specialist, high-grade materials. Although this has had some mild success slowing down development works, North Korean scientists are “very smart,” says Hunt, and have found work-arounds for a number of problems. They have already conducted heat-shield testing earlier than initially predicted, and so solid state ballistic missile reentry capability could also be developed relatively soon.

Once you have an ICBM missile you have to put an atomic warhead on the end. North Korea currently possesses enough nuclear material for about 15 such weapons but miniaturizing that technology is far from easy. Currently, they have honed nuclear bombs down to about half a meter in diameter, so smaller versions are “very much in their grasp,” says Hunt.

Schematics for North Korea’s new KM14 ICBM, which they claim is deployable but has never been tested, shows a nose section for such a miniaturized payload. It has an estimated range of up to 15,000 km, though some put the figure closer to 6,000 km. Hunt expects a test launch of the KM14 or derivative type class missile by the fall. As such, four to five years seems closer all the time. And let’s not forget about the U.S. islands of Guam and Hawaii, nor the 28,000 American soldiers in South Korea and 50,000 in Japan, who remain under more immediate threat. 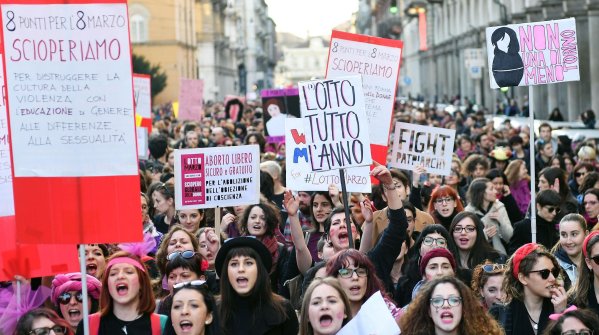 How the World Celebrated International Women's Day
Next Up: Editor's Pick