Wednesday, otherwise known as International Women’s Day, will this year become the “Day Without a Woman” or the “International Women’s Strike.” It’s set to be one of the largest anti-Trump collective actions since the Women’s March in January and is meant to demonstrate the enduring solidarity of the resistance movement. Organizers, including many who put together the historic post-Inauguration Day march, are asking women to abstain from paid and unpaid work, avoid spending money at big corporations and wear red in solidarity with labor movements.

School districts in North Carolina and Virginia have cancelled classes Wednesday, citing low staff turnout. The main offices of the National Organization for Women, the National Women’s Law Center, the Democratic Socialists of America and NARAL Pro-Choice America will be closed so staff can participate. Hollywood talent agency UTA is excusing all female staff members from work, encouraging them to instead attend women-only off-sites where they can discuss gender equality.

But for the major non-profits and labor organizations that helped fuel the energy behind the Women’s March, encouraging a strike can be problematic.

“It’s more of a ‘global solidarity day’ than a ‘day without a woman,'” says Amaya Smith, a spokeswoman for the AFL-CIO, which was a partner in the Women’s March. “There’s a very definitive definition of what a ‘strike’ usually encompasses in a workplace, and encouraging people to participate in a day of solidarity is a little different from that.”

Planned Parenthood and the Natural Resources Defense Council, both premier partners of the Women’s March, will be open on Wednesday. And while many labor organizations have expressed support for the Day Without a Woman and plan to participate in rallies, few have encouraged their members to stay home from work.

“Our doors are open to women who participate in the Women’s Strike and we encourage women who are striking to do something healthy for themselves — like get a checkup,” says Kelley Robinson, deputy national organizer for Planned Parenthood Federation of America in a statement. The Natural Resource Defense Council will also not close, but plans to “support the many ways our staff may choose to honor the day, including participating in the strike or related events or activities,” said Jenny Powers, senior director of marketing and media relations.

Nurse’s unions and teacher’s unions both came out strong for the Women’s March — which drew millions of people to marches around the nation, including at least 470,000 to Washington D.C., roughly triple the size of Trump’s inauguration. But the ‘Day Without a Woman’ is on a weekday, not a Saturday like the Women’s March, and many of the labor organizers that supported the March said urging members to walk off the job can be fraught.

“We’re being very careful and very intentional about how we communicate with our members,” says Randi Weingarten, president of the American Federation of Teachers, a which was a partner in the Women’s March. “As a union, we have the ability and the authority to conduct economic strikes. And we’re being very careful not to do that in any way.” She added that the AFT was “very careful not to participate in the aspect that’s about withholding services.” In an email sent out to members on Tuesday, Weingarten urged their 1.6 million members to “stand in solidarity” by “joining an event, wearing red and participating on social media,” but did not mention staying home from work.

The 1199 SEIU, which represents health care workers across the East Coast, was also a proud and vocal partner of the Women’s March. But the largest health care union in the nation — an industry dominated by women — has chosen to sit out the Day Without a Woman completely. Spokesman Mark Riley said that the union was “not officially” participating, and that he didn’t know whether members were choosing to strike on their own.

The National Domestic Worker’s Alliance, another partner of the Women’s March, chose not to call on workers to strike. “With the essential nature of care, it’s hard for many who are caring for elders or children to take a day off,” says NDWA spokeswoman Jennifer Dillon, adding that some members were planning to go to a Women Workers Rising protest in Washington D.C.

The ‘Day Without a Woman’ organizers say they never expected every woman in America to strike. “We are fully aware that to walk off the job is a heavy load,” says Janna Pea, a spokeswoman for the organizers. “By no means are we pushing women to take off if they’re not in a position to do so.” She added that women who couldn’t take the day off can wear red and avoid buying from big businesses to show solidarity “for those that are striking on your behalf.”

But for those who are planning to strike, the Day Without a Woman signals a change in the meaning of International Women’s Day, which has traditionally been more about “raising awareness” than direct political action. “International Women’s Day had unfortunately become an anodyne ‘happy happy’ thing, and not really focused on the need for political power,” says Terry O’Neil, president of the National Organization for Women. “Political, policy-focused feminism is coming to the fore, and it’s hugely popular among women.” 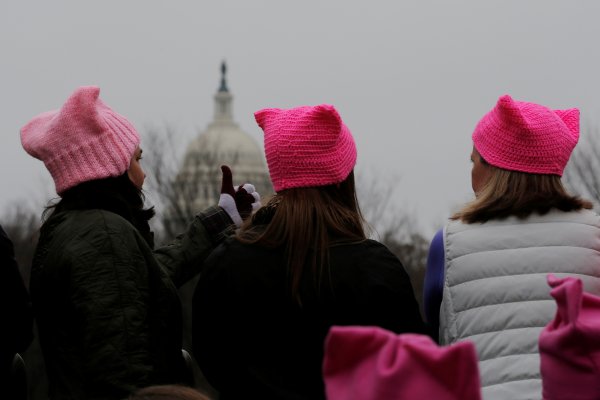 Here’s What a Day Without Women Would Really Look Like
Next Up: Editor's Pick