This Is Why Pandas Are Black and White

Researchers say they have figured out why giant pandas are distinctly black and white — a seemingly simple question that has long stumped scientists and fans of the beloved bears.

The panda’s white fur helps it hide in snowy habitats while its dark markings both aid in camouflage and communication efforts, according to a study recently published in the journal Behavioral Ecology.

“Understanding why the giant panda has such striking coloration has been a long-standing problem in biology that has been difficult to tackle because virtually no other mammal has this appearance, making analogies difficult,” the study’s lead author Tim Caro said in a statement. “The breakthrough in the study was treating each part of the body as an independent area.”

Pandas have black shoulders and legs to camouflage in shady environments, but they have black ears to signal aggression to predators and dark patches around their eyes to help them recognize other pandas, the study suggests.

The team of scientists from the University of California at Davis and California State University at Long Beach said pandas have to adapt differently than other mammals because their bamboo diet doesn’t allow them to store enough fat for hibernation. That means they’re active all year and must travel across long distances and through different environments. 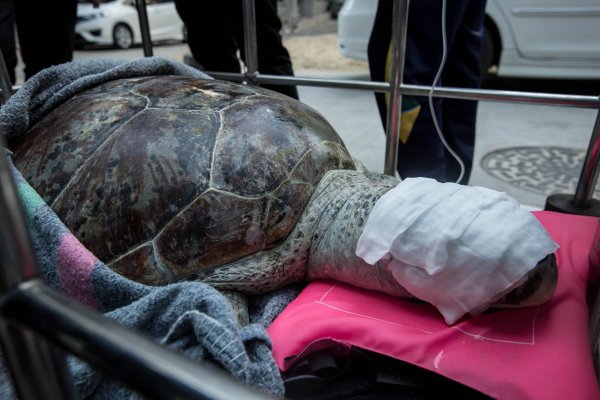 A Turtle in Thailand Needed Surgery After Eating 900 Coins People Threw in Its Pool
Next Up: Editor's Pick